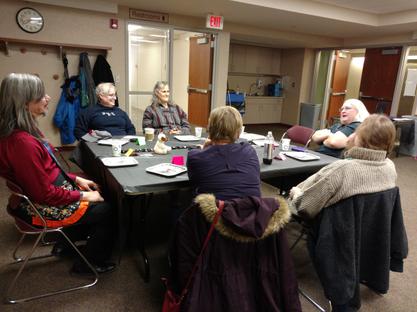 Chambana Death Cafe was held on the evening on the fourteenth of December, 2016, at The Urbana Free Library in Urbana, IL.

There were six attendees; one could not appear in person. Four had never attended a death cafe before. Two were associated with the University of Illinois and death research is part of their jobs. One was also an Uber driver, one was retired and one woman, a nurse, stated she had authored a child's book on death and I got a peek at it before she left as her friend had it on hand. Finally the one who was in absentia had sent me a letter about a dream she wanted to share but she could not attend due to distance.

I had hoped for more people to come but had been told by a half dozen friends and neighbors that death cafe sounded scary. Since everyone attending today's death cafe had a good experience I asked them to share that with their friends and family and perhaps attendance will increase.

The venue was in a large conference room in  the basement of a popular library. The weather was 13 degrees and windy so that may have kept our numbers low as well as a plethora of holiday activities.

I took Go Wish cards and five books about how to talk about death (one written for professionals) and several for children or adults in general for people to use or look at.  We decorated with black table covers and Bony, my hand painted rainbow skeleton that usually hangs on my front door.

One person related how, after the death of the family's grandfather, family had a home funeral in 1967. His casket was laid on a table and a glass top was placed over it so that people could see him but not touch. He thought this was common in the Philippines at that time.

Another discussed the funeral experience at the death of her father. At age nine she said she was forced to view him in his casket despite his disfigurement and she was horrified and has only recently been able to get near a funeral home. She noted that her mother died two years ago and that was not as hard in some ways.

One lady said she was Jewish and, at a family funeral, the director asked her if she thought her family member looked good. She said "she looks dead" and he was hurt or offended. She eventually was able to say "she looks good for a dead person" and he still ended up being unhappy. She felt as if she were supposed to comfort him instead of dealing with her own grief.

We talked about how dark humour can help people cope with like death.

I read a letter aloud sent to me by a very old dear friend about a dream she had about her daughter who died of a drug overdose about eight months ago. The dream seemed very real and left her with comfort and the sense that her daughter had actually visited. She lamented that she could not come to the death cafe in person.All who came expressed an interest in attending another death cafe in the future.

I am going to be spending time with one of the women, the nurse, to network and work towards hosting a death cafe, hopefully, every two months. She also is a member of a church she is pretty sure will be open to hosting death cafes as well. She also related that she has 2 brain tangles and has been told they will kill her sooner or later most likely. She has had one stroke already. She works and gets out in the community and curls up with her cats and husband at the end of every day stating her thanks and knowing she might not wake up acknowledging none of us really know if we will wake up tomorrow.

We served cake slices, cookies and juices - some of which were "no added sugar" in case there were any people who had issues with sugar. We had a lot of leftovers because people brought their own drinks and it was after dinner. Since this venue has a cafe I will have to revisit how much to bring in the way of refreshments.

I am considering the possibility of finding a way for people who are not near to join us at a death cafe. Skype perhaps?

Someone left 2 dollars on the table but I had told people there was no need to pay to attend. The venue was free so I spent about 25 dollars for this particular death cafe.

Evaluations were completed by all attendees. Raymond and Sherry were evaluated as excellent or very good by all. Two people said that attending death cafe did change their views on death but did not elaborate. The conversation was quite lively and friendly. All were enthusiastic about the possibility of attending future death cafe(s) and would recommend it to others.