A write up of 20th Death Cafe Hampstead, London, UK 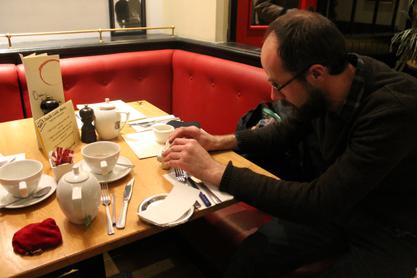 This Death Cafe Hampstead was held in March 2015! Now it is March 2016! Apologies for the late posting!

The conversation around our table flowed easily despite getting disrupted by late comers and student filmmaker Maya Rostowska getting up to film. A wide range of topics were discussed. A very enjoyable and moving experience with support from co-facilitators Philomena Corrigan, Heidi Twelvetrees and Caroline Dent.

Apologies for late posting of this. Stats will be supplied later.

People's experiences of this Death Café:

Wonderful. We had real conversations rather than just informing each other of our respective experiences. It is also the first Death Café I have attended that’s made me keen to bring my mother along to a Death Café. Student film maker, female, 27.

Six on out table – three men and three table – we covered a lot of subjects, but at times  there were gaps in conversation, which I wanted to allow so that things could unfold naturally, rather than artificially. Good experience generally, although one group expressed the feeling that the group did not gell as she expected. Not totally sure about feedback in the plenary. In some ways preferred open discussion.  Maybe pick one topic of interest rather than cover all. Designer/doula, female, 56.

So inspiring that people able to share and talk openly with each other, it felt safe and supportive. The facilitator helped hold the group. Nurse, female, 48.

I enjoyed the range of topics and opinions raised around death and appreciated the new thoughts and feelings these aroused in me. Thank you, in the words of Arnie, I will be back. Musician, male, 30.

It was my third death café and as I had hoped, there are always new things to learn when talking about death. I bonded well with the group and enjoyed the conversation. Film maker, female, 48.

From the advanced directive ‘Living Will’ to what’s important in a funeral to what happens after death. Always interesting. Business analyst, male, 43.

I really enjoyed the sense of connection; listening to other experiences; hearing others talk about their deep fears; and joys. Actor/sculptor/teacher, male, 67.

Very warm, different personalities and age group coming together. Enjoyed learning about our dying preferences and about what we thought would happen at the end of our life. Scientist, female, 40’s.

An interesting evening where people shared intimately, experiences and personal stories. An interesting question at the end was ‘when are we starting to die’? The table did not cover many topics, but actually time and space was given to stay focused and sharing in depth. Psychotherapist, female, 58.

Very informative, helpful, interesting. I felt it would have been good and it was. I felt safe and warm. More clarity about when the group was to begin. We started before the group was complete and it was a little difficult, I felt.  I felt a clear bell for beginning and then saying our name going round the table and why we were there, need for a more clear beginning. Art therapist, female, 64.

I felt completely at ease, my group was really interesting. We discussed life, death and afterlife and shred experiences with each other. I felt there was a beautiful energy in the room and especially after hearing the other groups. Petsitter, 53.

Its very unusual in this society to be able to discuss important subjects with complete strangers. Conversation normally centres around small talk. Even less to talk about death. Thanks for providing this setting where people can come together to share and learn about this extremely important and neglected subject. Accountant, female, 41.

Welcoming; easy to get started. Reaffirming the unity of humanity – despite our various beliefs – which, lets face it, are adopted anyway. As always, one learns more about oneself here which is the reason why I came. No new resolution however. Naturopathic iridologist, female, 61.6

A wonderful opportunity to meet with others who are not afraid to discuss our mortality. I found the group to be empathic, compassionate, intelligent, honest and refreshing. To be so open within a group of relative strangers is something which could be so beneficial to many. I have certainly been inspired to run my own Death Café in the future. There were a few moments of discomfort with one group member who appeared quite angry at the start. However, the very nature of Death Café appeared to resolve this. Postgrad. student in Sociology, previously worked in end-of-life care, female, 36.

Wonderful space to discuss many levels of a certain but taboo subject in eating and sharing ideas. Very comfortable all the way. Counsellor, female, 70.

Amicable, honest, pioneering. It's a mixed discussion because we are all at different stages with this and different beliefs. I have no anxiety about death, having done so much research on evidence for life’s continuance. So what you have is great, and in addition, could see other levels of discussion eg. Those that want to focus on the emotional confusion or uncertainty of it, and those who want to look at a more upbeat approach to it (like me). IT professional, male, 59.

Enjoyed the exchange in the small group, everyone took part, good discussion – I felt well afterwards. In plenary with some people (well, especially one, rest OK actually) frustrated by my deafness (although wearing hearing aid. Doctor/adult teacher/ film maker/director, male 84. 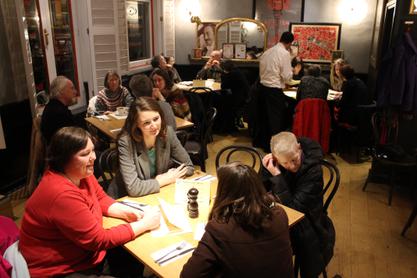 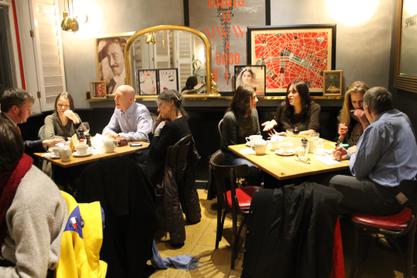 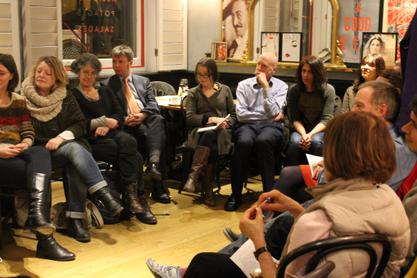 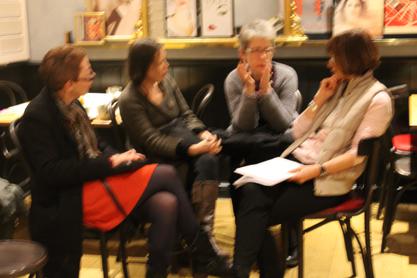