A write up of Filmed Death Cafe Hampstead, London, UK 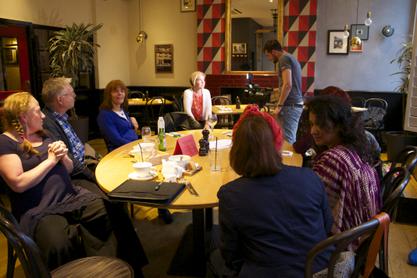 Yesterday's filmed Death Cafe for Metro.co.uk was a great success. Nine of us sat around the oval table in the middle of the room, talking about death, whilst Ethan Daish, the young journalist armed with a camera, quietly moved around filming. We had a great time and the conversation flowed. Some of the things we spoke about were a funeral director speaking about organising a close family member's funeral, different funeral traditions, not following family traditions, funeral traditions in different cultures ; waking up at night in shock at the thought of dying one day (or could it be the realisation, "I am ALIVE! Now! WOW?"), flying on holiday and thinking 'what if....' the plane were to crash, as in the German Wings tragedy or 9/11 or if it were to disappear and never be found? We spoke of differnent attitudes to death, and how health care in other cultures affects attitudes to death.

Most of us spoke of intimacy as being one of the prime factors why we enjoyed Death Cafe so much and we all felt there was lots to be gained from talking with strangers about death. Someone came up with the idea of holding a sign up standing in the street saying Talk to me About Death. And one said he wished that waiting at the bus stop, someone would come up and say 'Can I talk to you about death for 10 minutes whilst we wait for the bus?'. We are all pretty keen to hear people's personal experiences, ideas and beliefs about death. We could perhaps be thought of as intimacy junkies! Just kidding! In the end it is all about life, and living. One of us suggested that the translation in the bible of the 'fear of god' should have been to say 'in awe' of god, after all, life, and whatever you call god is pretty awe inspiring, no?

Part of the group were one young philosophy student, a funeral director, an osteopath, an academic writer on death studies, a hospice volunteer, a university lecturer, and two psychotherapists.

We will post the link to the video when it is ready. Here it is:

I think someone should dare to publish the actual conversation that happens at a Death Cafe. The conversation at this filmed Death Cafe Hampstead was very interesting ( I have yet to come across a boring one!) And the interviews would be great to hear too! Maybe we should do this ourselves? I'd do it here in London anytime.