Let’s Put the Fun Back in Funeral

A write up of Second LGBT Death Cafe in the US! 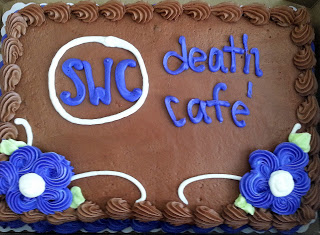 Who knew one could laugh so much at an event where people are sitting around talking about death?  Our 2ndLGBT Death Café was a totally different vibe from the first one.  The Death Café was hosted in partnership withStonewall Columbus, the local LGBT community center.  My co-host was Lori Gum, the program Director.  We had twelve attendees which was the perfect size for conversation.  We started out in three small groups and then rolled up to a larger group at the end.  I didn’t know WHAT they were talking about, but the other two tables would have frequent bursts of laughter.  Finally, when we rolled up to one large group I got to hear some of the humor.  Perhaps you had to be there.
Conversations were varied, as they always are.  It is why I love the Death Café concept.  I’m a bit strict on maintaining the principles of “no ideology, no agenda.”  In my mind, that approach really pays off because the conversations go anywhere and everywhere.
One attendee talked about the tragic death of a child in a school she worked at.  She fought to have the children have the opportunity to participate in memorial services.  One innocent child, with only the experience of weddings and birthday parties had asked her, “When do we get to send the invitations?”  The group all agreed that death education at a young age would be beneficial.  We should be taught about death and finances.  Well, Ben Franklin did say, “nothing can be said to be certain, except death and taxes.”  In relation to educating children about death, one attendee said, “You can’t keep children in a greenhouse and then put them out in winter and say that’s life.”
What would you have on your epitaph?  One attendee commented that she discovered that the cemetery would not allow, “Takes no bullshit” in the mausoleum but that phrase could be inscribed on a tombstone.  I may have to adopt that phrase as my motto.
Sort of funny, sort of not… one attendee said, “My fear is that I die and no one finds me and then my animals eat me.”  Ewww.  Friends at the table assured the attendee that they wouldn’t let that happen.
We did also talk about animal companions that provide support to cancer patients.  One attendee told a story about a place that recognized that the dogs that were providing support exhibited signs of grief themselves.  They ended up rotating the dogs so that they could spend some time away and recharge their energy.  Once the rotations started, the dogs did better with not being too sad themselves.

My favorite mysterious quote from one attendee, “I don’t have to worry about an open casket because my body won’t be found.”  I would like to explore that a bit further!