A write up of Death Cafe with the Natural Death Centre 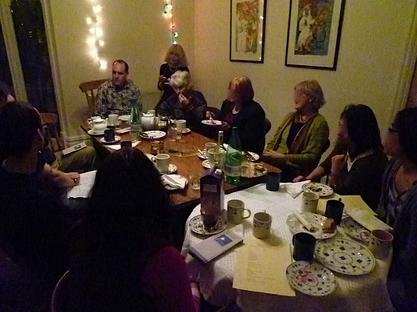 This was a special Death Cafe to celebrate the Natural Death Centre's 21st birthday. My husband Nicholas Albery and I founded the NDC in April 1991. Nicholas ran the office in the garden room and I held Death Salons and workshops in our living room. Ten years ago Nicholas died in a car accident and since then the office has moved out. It is now based outside London, near Winchester. For info see: www.naturaldeath.org.uk

This was the first Death Cafe I held, with Jon Underwood, the founder of Death Cafe in the UK. In setting up the Death Cafe website and promoting it as a free event that could be held anywhere, Jon has started a new movement to promote conversations about death which has spread rapidly around the world, especially the English speaking world, particularly to America.

Here in London on this cold, damp Autumn day, 12 of us gathered around two tables, with an open fire burning in the fire place, for tea, coffee, cake and sandwiches to talk about death for 3 hours. Some people had travelled from outside of London to take part at this unique event.

I have hosted many 'Death Salons' at this house as part of the Natural Death Centre's educational programme, but these were never free, though always low cost and a speaker or two were invited to start the discussion off, people had a drink to start and food was consumed at the end.

Death Cafe is different. It is free, though this time we asked for donations to cover expenses and to support the work of the NDC. At Death Cafe you sit and talk whilst you eat and drink, or at least you imagine you do. I actually find eating and drinking whilst talking about deeply personal and emotional things not easy to do and I did not find it easy at this event. Hence Jon helped me out by being there. And what a great afternoon we had!

Talking about experiences of bereavement and how we coped creatively in these circumstances, some untimely deaths, were some of topics we covered. For some people it was just great that they could talk freely about death without being thought of as peculiar or morbid.

There were rich exchanges to be had and everyone left feeling nourished, and this was not due to the food, although that was very tasty too!