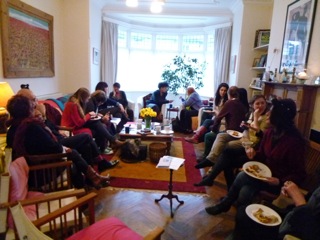 Olivia was a teenager when her mother died: “In the ten years since my mother's death, my family and I have had frequent, vivid and profoundly moving dreams about her.” 'Noctuaries' looks at how she, her father, her mother’s parents and her mother’s best friend have responded to these dreams, and how they have formed part of their grieving.

She is a documentary filmmaker based in London, and has just finished a Masters in Screen Documentary at Goldsmiths. She won the RTS's Best Postgraduate Factual Film award and Best Documentary at Exposures Film Festival. Her films have been screened in around forty festivals worldwide, including the East End Film Festival, Brazil's It's All True Festival and the BFI's London LBGT Festival.

Josefine Speyer is a UKCP registered psychotherapist in private practice in London since 1985. With her husband Nicholas Albery she founded the Natural Death Centre in 1991 (www.naturaldeath.org.uk), an educational charity of which she is now a patron. The NDC provides advice and information on funerals via its free help line and through the Natural Death Handbook.

Josefine specialises in death education to help people think and talk about death as a natural part of life and to educate them about choices.  Since November 2012 she has hosted Death Cafés at her home in NW London, in Hampstead’s Café Rouge and in Oxford. She holds monthly Death Cafés in London.