Smaller turn out for this event but attendees were keen.

A write up of Death Cafe Wirral 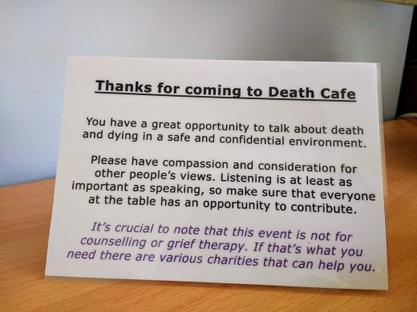 My first event in Hoylake brought 24 participants to drink tea, eat cake and discuss death back in May. This time we tried a different venue and had 12 participants.

Stollies in Wallasey Village is a lovely cafe and is a great place to relax and chat and it as has very friendly management. They had, however, recently decided not to put any posters up in their windows to advertise events, as they had recently been inundated and their windows were getting to be a bit of a mess. It’s a situation I understand but having spoken to the management, they too agreed that perhaps in future they would put posters up just for events that were happening in the cafe. Whether this had a huge impact on the number of participants it’s difficult to know, but I will carefully monitor numbers at future events and we do hope to return to Stollies at some point next year.

I publicised the event as well as I could using the Death Cafe website, our own facebook page, the usual social media channels and getting a couple of mentions in the community pages of the Wirral Globe. Our facebook page noted 9 ‘going’ and almost 50 ‘interested’ but those numbers evidently didn’t translate to actual attendees.

Of those who came along 3 had been to the previous event. We had 10 female and just 2 male participants with the youngest being in their mid-20s and the oldest probably in their 60s.

I gave everyone the choice to talk in one large group or two smaller ones and nobody minded except one person said that they’d prefer smaller groups so that they could hear properly. A valid point and one to bear in mind for the future. We, therefore, had 2 tables of 6.

I put laminated cards on each table reminding people to have compassion and consideration for other people’s views and that listening was at least as important as speaking, so to make sure that everyone had an opportunity to contribute. I do like having these on the tables but in future, I might place them on tables earlier and read out what’s written on them just before we start.

I suggested that each person take it in turns to introduce themselves to everyone else at their table and to say briefly why they came to the event. I assured them that conversation was then bound to flow - and it did.

As there were only 2 groups and we started slightly late (whilst I waited to see if anyone else would arrive) I joined one of the groups and took part in the conversation.

Conversations ranged from light and funny to dark and quite disturbing. Several people at the end said that they’d return to future events and everyone responded positively to the event as they left.

The next one will be on the 11th September (7pm to 9pm) at Hoylake Community Centre.