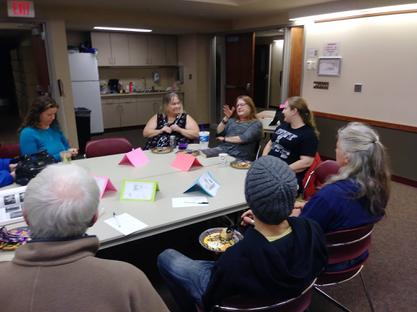 We met in the basement of the Urbana Library and had a good conversation. Four attendees were new. We served coffee and cake and it was well-received.

Conversation topics were: history of death through the ages, home versus funeral home funerals, and unscrupulous behavior by family members at the time of or after death.

One woman discussed that her Mom gave her post it notes to mark items she would like to have after her mother died.

Another person said she had a similar experience with colored dots. Every sibling marked what they wanted and, if two or more people claimed something, they had to work it out between themselves.

Others recounted how family members took what they wanted without permission. It seemed a somewhat common experience.

One woman discussed her archaeology work since part of her job is to excavate bones or to look at bones found at mounds, or those overturned in construction. She explained the practice of some places removing headstones but leaving bodies and bones in the ground.

No evals were requested by myself or my co-faciliator. We did point out there were blank papers if anyone wanted to leave a comment of any sort.

It was noted by one person that the open and unguided nature of this death cafe was a good thing.

I had reiterated that the nature of a death cafe is conversational and driven by participants and that people can come and go as they need to.

Everyone was comfortable with  photos being taken.