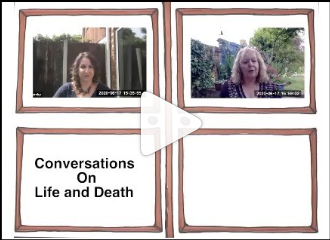 It's Death Cafe's 9th birthday today... Twelve months ago I could never have imagined there would be such huge changes in the way we operate. As Death Cafe enters its 9th year we are now regularly holding discussions about death with groups of people who reside in very different geographical locations across the world. People who live 1000s of miles apart are all coming together on one computer screen, using software that most of us had only ever heard about before or used at work. It now seems cliched to say we're in unprecedented times, but, it’s true. We also have no idea what the future holds for gatherings, and we may find that the Death Cafe model and guidelines require further adaptations to meet the new digital needs of the movement.

It has been wonderful to learn how participants have valued hearing about experiences and opinions from people they would never usually have the opportunity to speak to in a traditional physical Death Cafe. We’ve also heard lovely stories about people who would have been too sick to attend Death Cafes being able to participate online, and even a new born baby greeting fellow Death Cafe participants on one occasion. Death Cafe has been featured in a number of media outlets including CBS, Oprah Magazine, The Guardian, Sky News and The Evening Standard to name a few. There have now been nearly 11,500 Death Cafes in 73 countries! My Mum Susan Barsky Reid who started Death Cafe with my brother Jon Underwood, held her first Death Cafe since Jon’s death in June 2017. This took place online and again, brought together people in a number of countries. We have also given our good friend Megan Mooney, who has run the Death Cafe Facebook page since nearly the beginning of the movement, the title of Death Cafe Lead - USA.

Our amazing Death Cafe hosts have gone with the flow and continued to provide wonderful safe spaces for people to talk about death and dying, and we couldn’t be more grateful that you've continued to do that during such a difficult climate.

For me personally, this has been a life changing year. September saw me move across the country to start medical school on an accelerated programme. It’s been quite a culture shock going from full-time work to full-time student after a 12 year hiatus, and certainly a steep learning curve as I adapt. Death Cafe and Jon (particularly his death) were huge factors in my decision to pursue medicine; making the most of my finite life, doing something that would make Jon proud, and not wanting to be on my death bed thinking that something I’ve always wanted to do might pass me l by, simply because I didn’t know how to do it/ thought it was too late/ sheer terror!

It all goes to show, we can’t predict what the future will hold. All we can do is move forward as positively as we can, and try to make the most of every minute. Hopefully this time next year, we’ll have some more normality, but so long as we get through this together with compassion and consideration for those around us, we’ll be able to achieve great things.

Our wonderful friends at Flexible Films interviewed my Mum and I as part of a series they did about death and dying, and we wanted to share this 3 minute video with you today.

Death Cafe is run on a voluntary basis with kind donations from individuals who provide support via Patreon. If you are able to do so, we would be very grateful for your financial support. And if you can’t, please don’t feel pressured to do so. We think you’re brilliant regardless.

Good for you Jools.
Experience has shown me that death is merely part of a transition. Acceptance of life after death can open the way to an enhanced life. I've been playing around with the concept of 'Life After Death Cafe.' Might this fit somewhere into your "...research and development...."? Tony x