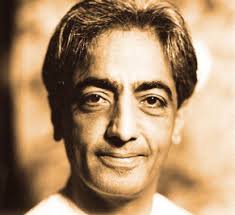 WALKING DOWN THE straight road on a lovely morning, it was spring, and the sky was extraordinarily blue; there wasn't a cloud in it, and the sun was just warm, not too hot. It felt nice. And the leaves were shining and a sparkle was in the air. It was really a most extraordinarily beautiful morning. The high mountain was there, impenetrable, and the hills below were green and lovely. And as you walked along quietly, without much thought, you saw a dead leaf, yellow and bright red, a leaf from the autumn. How beautiful that leaf was, so simple in its death, so lively, full of the beauty and vitality of the whole tree and the summer. Strange that it had not withered. Looking at it more closely, one saw all the veins and the stem and the shape of that leaf. That leaf was all the tree.

Why do human beings die so miserably, so unhappily, with a disease, old age, senility, the body shrunk, ugly? Why can't they die naturally and as beautifully as this leaf? What is wrong with us? In spite of all the doctors, medicines and hospitals, operations and all the agony of life, and the pleasures too, we don't seem able to die with dignity, simplicity, and with a smile.

Once, walking along a lane, one heard behind one a chant, melodious, rhythmic, with the ancient strength of Sanskrit. One stopped and looked round. An eldest son, naked to his waist, was carrying a terracotta pot with a fire burning in it. He was holding it in another vessel and behind him were two men carrying his dead father, covered with a white cloth, and they were all chanting. One knew what that chant was, one almost joined in. They went past and one followed them. They were going down the road chanting, and the eldest son was in tears. They carried the father to the beach where they had already collected a great pile of wood and they laid the body on top of that heap of wood and set it on fire. It was all so natural, so extraordinarily simple: there were no flowers, there was no hearse, there were no black carriages with black horses. It was all very quiet and utterly dignified. And one looked at that leaf, and a thousand leaves of the tree. The winter brought that leaf from its mother on to that path and it would presently dry out completely and wither, be gone, carried away by the winds and lost.

As you teach children mathematics, writing, reading and all the business of acquiring knowledge, they should also be taught the great dignity of death, not as a morbid, unhappy thing that one has to face eventually, but as something of daily life - the daily life of looking at the blue sky and the grasshopper on a leaf. it is part of learning, as you grow teeth and have all the discomfort of childish illnesses. Children have extraordinary curiosity. If you see the nature of death, you don't explain that everything dies, dust to dust and so on, but without any fear you explain it to them gently and make them feel that the living and the dying are one - not at the end of one's life after fifty, sixty or ninety years, but that death is like that leaf. Look at the old men and women, how decrepit, how lost, how unhappy and how ugly they look. Is it because they have not really understood either the living or the dying? They have used life, they waste away their life with incessant conflict which only exercises and gives strength to the self, the `me', the ego. We spend our days in such varieties of conflict and unhappiness, with some joy and pleasure drinking, smoking, late nights and work, work, work. And at the end of one's life one faces that thing called death and is frightened of it. One thinks it can always be understood, felt deeply. The child with his curiosity can be helped to understand that death is not merely the wasting of the body through disease, old age and some unexpected accident, but that the ending of every day is also the ending of oneself every day.

There is no resurrection, that is superstition, a dogmatic belief. Everything on earth, on this beautiful earth, lives, dies, comes into being and withers away. To grasp this whole movement of life requires intelligence, not the intelligence of thought, or books, or knowledge, but the intelligence of love and compassion with its sensitivity. One is very certain that if the educator understands the significance of death and the dignity of it, the extraordinary simplicity of dying - understands it not intellectually but deeply - then he may be able to convey to the student, to the child, that dying, the ending, is not to be avoided, is not something to be frightened of, for it is part of one's whole life, so that as the student, the child, grows up he will never be frightened of the ending. If all the human beings who have lived before us, past generations upon generations, still lived on this earth how terrible it would be. The beginning is not the ending.

And one would like to help - no, that's the wrong word - one would like in education to bring death into some kind of reality, actuality, not of someone else dying but of each one of us, however old or young, having inevitably to face that thing. It is not a sad affair of tears, of loneliness, of separation. We kill so easily, not only the animals for one's food but the vast unnecessary killing for amusement, called sport - killing a deer because that is the season. Killing a deer is like killing your neighbour. You kill animals because you have lost touch with nature, with all the living things on this earth. You kill in wars for so many romantic, nationalistic, political, ideologies. In the name of God you have killed people. Violence and killing go together.

As one looked at that dead leaf with all its beauty and colour, maybe one would very deeply comprehend, be aware of, what one's own death must be, not at the very end but at the very beginning. Death isn't some horrific thing, something to be avoided, something to be postponed, but rather something to be with day in and day out. And out of that comes an extraordinary sense of immensity.

Thank You for this beauty!

I loved this blog post. Thank You Krishnamurti! Thank you for that morning sparkle, the lovely green hills, the majestic mountain, and the life of a leaf. I'll read it many times today.

I wanna ask you something!

The thing which stop me to do comment is your website's name why you take this name? Death cafe?? What's the reason behind?? Besides for help in Forgot Roadrunner Account Password please visit: [url=http://www.emailcustomerservice247.com/forgot-email-password/][/url]