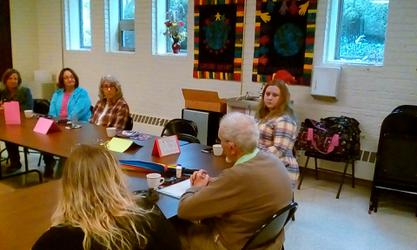 Our most recent death café was held on October 21 at the Universal Unitarian Church in Urbana, Illinois.

There were a total of fourteen sitting around the table. One person was a "regular" and everyone else was new. People heard about this death café through word of mouth, Facebook event posting, and friends.

The start was awkward but people finally started speaking.

One elderly gentleman with a hearty laugh notes he has heart trouble and while recuperating from heart attacks his daughter who was helping him said "you are going to have a hard time dying." This was possibly due to the fact that he now has an implanted defibrillator.

He spent his life adventuring and hiking and was exercising and experienced a cardiac arrest on the treadmill. CPR saved him (breaking some ribs) and then he died a couple more times at the hospital and has the "cadillac of defibrillators" implanted.

He was so impressed by the AED that helped save his life that he bought one for his church.

He also shared a story in which stranded hikers separated into two groups in somewhat dangerous, snowy conditions to find help. One man didn't return and no one ever found out what happened to him and he said they all wondered how they didn't miss him while hiking out.

He also mentioned it was preferable to die at home.

He added "you run a tight ship and I really enjoyed myself." I think he was referring to my intro in which I told folks about Jon Underwood and the rules we operate under such as not distributing literature or promoting any agenda.

One woman spent years caring for her parents. Her dad died first and somewhat peacefully.

Later, she cared for her mom and it was hard and her mom was in a lot of pain and she didn't feel sad about her dying because it seemed that her death happened at the right time.

She had avoided the swimming pool the entire time she cared for her mom and the day she died she suited up and floated in the pool and saw all the cloud formations in the sky. Each reminded her of her mother and she was peaceful.

This happened a while ago and she has been waiting for the right time, place and people to share this story and our death cafe was her chance; she was happy and sad. She was tearful while telling her story.

There was a discussion between people after one woman said that funerals are for the living and it doesn't really matter what the dead person might have wanted.

Several people did not quite agree for different reasons. For instance an example of a transsexual person being buried as she was at birth, a man, came up as an example of why that was not really true or fair to the deceased.

One woman said she was getting stuff together to prepare to die and doesn't have support to make it happen faster and stated she was looking for encouragement. Decluttering and necessary paperwork were briefly mentioned. She seemed to feel encouraged by the group.

One woman came and left early and another came late and stayed til the end. They are friends and the youngest attendees. Both have a deep fascination with death oriented topics, ways and customs. They mostly listened.

One woman left early to attend a funeral. I had been advised more people would have come had the timing worked out. Many went to this funeral.

Is it fair to control children's ability to see the dead or to attend a funeral? One woman said no kids were permitted at funerals when she was a kid and that people disappeared with no explanation. That bothers her now.

Another said he was glad to go and see his dad and he was taken to the funeral. He told of another person he knows who was forced to go to her father's funeral and it has had a life long effect on her.

Another man spoke about being denied going to the funeral by the dying person because she felt it would interfere with his memories of her, his Grandma.

One woman mentioned that people can decorate their own coffin these days if they wish to.

Views on death post conversation were mostly unchanged. One said the death cafe conversations gave her "food for thought" and another said "yes and no."

One woman said we have to get the word out "and let more people know somehow" about what death cafes are all about.

One person remarked "this is really taking off here" when noting how many death cafes we have had this year in this area. I was also asked about the possiblity of holding an online death cafe as well.

All noted that the location and food were either good or excellent. Those in charge of this location were kind and generously provided cake and some other snacks with coffee and tea.

We discovered a new question to ask about locations and that was about the type of tableware that is "permitted." At this one we found out that they prefer glass and china and silverware as it can be washed and they did wash all the items that were reusable. We helped them put the room back in order after we were done.

I continue to talk about Death Cafe a lot wherever I go. I hope others spread the word.

Short evaluations were completed by about half of the participants. All but one person gave permission for pictures to be taken to be posted on the Death Cafe website and on Facebook.

I made it abundantly clear that Death Cafes do not have an agenda and stressed that they are simply conversations.

I do not ask for any monetary donations. I do encourage people to send donations to Death Cafe to help Jon Underwood's family keep Death Cafe going.

Keeping the conversations going is important to me. 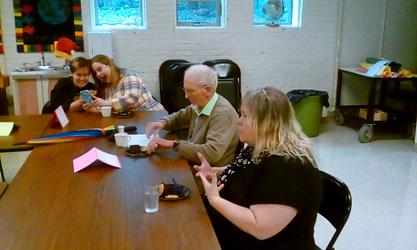 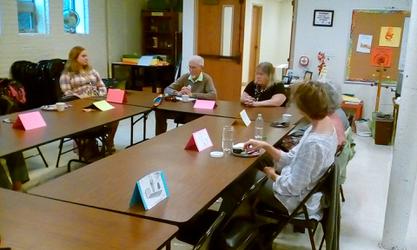 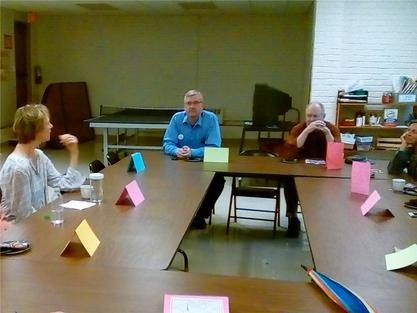