A write up of Death Cafe Iowa 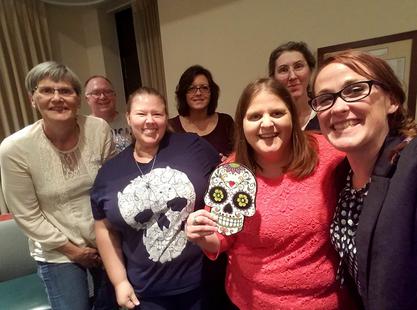 Our October Death Café was a bittersweet one to say the least. Carrie Bauer, Buffy Peters and Carmen Elliott (members of the Young Bereavement Professionals Group) are the facilitators for the group and this was the last Death Café in Iowa for Carrie as she has accepted a position in Colorado. Hopefully she can find Death Café people out there but the Iowa Death Café people had to say our goodbyes to Carrie.

After catching up during this Death Café we started talking about cremation jewelry. One participant recently had a dog die and brought some of the cremation jewelry she purchased online. That spurred an interesting conversation about the death of pets and their cremated remains. We also talked about mortality now vs the past and how the medical world is needing to respond to humans living longer and dealing with more diseases than they ever had to. We also discussed miscarriages and the idea of not talking about a pregnancy until a certain trimester is reached. We had a long discussion about what you would want to wear for your funeral which was really interesting to think about. We also had a lengthy discussion on the things people say to someone who is grieving or related to death and dying.

While it was a sad Death Café as we had to say goodbye to Carrie, it was a fun and enlightening night as well. We are looking forward to November’s Death Café and what inspiring conversation will happen then!