A write up of Chambana Death Cafe July 2017 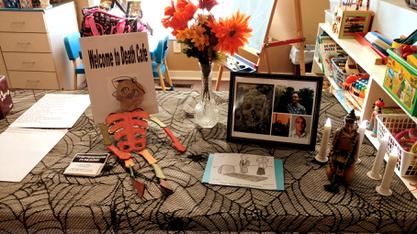 Our most recent death café was held on July 15, 2017 at the Unity Church and Spiritual Center on Main Street in Urbana, Illinois.

This was the first death café I held since the death of the founder of Death Café and Impermance, Jon Underwood, died unexpectedly about a week before. I was shocked and managed, for this café, to get some pictures and shared a bit of his story before we got started.

Incidentally he had been working with a Buddhist temple to arrange death services and burials to be done there. They honoured him by making his funerary service their first.

There were a total of fourteen of us around the tables. Three people were new to participating in a death café. They came from a local church and were interested in seeing if the death café model fit in with their community offerings. They have developed a program there centered around death and dying with a focus on death with dignity.

After a round of introductions the conversation covered popular themes like green burials, cremation versus traditional burial, and included concerns and information on the environmental impacts of both.

Some with experience of local cemeteries discussed attitudes of funeral directors, in general.  Some more favourably than others. The Funeral Consumers Alliance is represented locally and that person was at this death café.

We discussed topics including embalming history as  one participant brought some books she had about death. One in particular was the history of death practices starting during the American Civil War and this sparked some conversation.

I also felt compelled to get the book and start reading. It's a rough read. This Republic of Suffering: Death and the American Civil War. I think the book is foundational for anyone working or volunteering in the death arena.

Another book shown by the same woman had pictures of people memorialised by post mortem photography. The images were discussed. Two of our regular attendees have been involved in excavations of sites involving human remains.

We served two kinds of cake, coffee, water and some participants brought their own drinks.

The evaluations were completed by everyone attending, anonymously. They ranged "happy to be here" to even more enthusiastic. We are finding some regulars wanting to come back because the conversation is never quite the same from one to another death café.

One participant brought his tween age daughter and she declined to be in any photos but everyone else said taking and posting photos to Facebook and this website was fine.

We arrived ahead of time and managed to set up before anyone showed up. :) That was a problem last time. (Death Cafés are exciting!)

I do not ask for donations at all. I tell people to send donations to Death Cafe to help Jon Underwood's family keep Death Cafe going. Keeping the conversations going is important to me even if Jon doesn't get to see the full fruit of his labours and love. 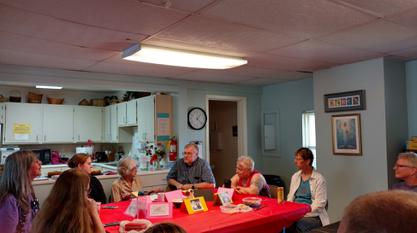