Chambana Death Cafe May 2017 Write up

A write up of Chambana Death Cafe May 2017 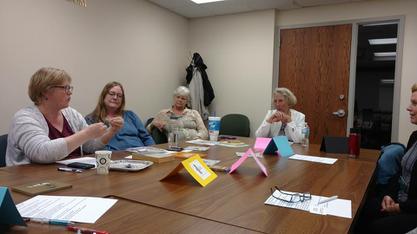 Our most recent death cafe was held on May 3, 2017 at the Urbana Free Library in Urbana, IL. The library does not endorse organizations, topics or presentations but is kind to provide free meeting space for non-profits once a month.

There were a total of ten of us around the table. Several people were new to participating in a death cafe.

After a round of introductions the conversation covered popular themes like green burials, cremation versus traditional burial in a cemetery and the usage of vaults to keep cemeteries from caving in. Mushroom suits and being planted as a tree were interesting topics some brought up.

Family attitudes towards funeral participation were discussed; a couple of folks basically noted that they were hush hush affairs (even when a parent died) and they were not allowed to be part of the ceremonies attending the end of life. A quiet talk with a child bereaved by the loss of a parent did not offer much information about why or how someone "went away" and people affected were not encouraged to ask for more info. It was unsettling for it to be this way, growing up in families that wished to protect children from the topic of death.

One woman told of the home funeral of her grandfather who, incidentally, was the person in the sparsely populated area of Kentucky who built coffins. He didn't make one for himself ahead of time so his was store bought. She noted that a laying out occurred in an upstairs bedroom and they slept downstairs while people were picking banjos and strumming guitars on the porch all night. She said it felt more like a celebration of life than a mourning of a life well lived.

Some of the people present noted how death is handled so efficiently with schedules and in a business-like manner since the old traditions are mostly gone and how the new ways keep family too distant from death.

Someone brought up a Civil War documentary that explained the purpose and start of embalming. Most did not realize it is not required in most cases.

Our hospice volunteer had never heard of death cafe asking "is this a new thing?" and said she felt out of the loop. She remembers Kubler-Ross and the sixties and wondered why we are still in the dark ages with how we deal with death.

One woman felt very strongly that hospice was a bad thing. She noted that once her patients were put on hospice they were given morphine and they died quickly. She seemed angry at this. She had done companion care for years. She said that all meds were stopped except for the morphine and that hospice was forced on people. I could not validate or dismiss her concerns but suspect she was not entirely involved in the medical choices.

One person left early so we did not receive an evaluation from her.  Everyone else filled theirs out. When I get help to read them I will edit this write up to include their comments or feelings.

People talked about cremains and problems that occurred when holding onto them at home. They also mentioned people being covered in ashes because they were down wind of the scattering. The phrase "he was sweeping the ashes" was born that day in one family that experienced that.

Some thought that people hold onto ashes due to fear of losing control of the contents (and perhaps the person).

One young woman is currently working on her dissertation which she must defend soon and we offered to dispose of it ceremonially - she named it Pierre - when she is done presenting it in June.

People in the group talked about the value of post mortem photography in families that had very few pictures at all and especially noting at the death of an infant or child it was probably the only photo of that person that would ever exist.

One woman indicated that those pictures bother her and asked the group how to get over that and was advised "to look at more of them."

Two of the people attending have been involved in excavations of sites involving human remains.

Two people had noted they couldn't come due to work obligations. We missed them!

We served lemon cake, coffee, water and some participants brought their own drinks. Apparently there is a small cafe in the library somewhere.

We arrived on time and three people were waiting for us. We did not have time to make things nice and neat because of that and looked a bit "unprepared." Next time we will build in some time in case people can't wait to be there again. :)

I do not ask for donations at all. I tell people to send donations to Death Cafe to help Jon Underwood keep the website up.