A write up of Chambana Death Cafe March 2017 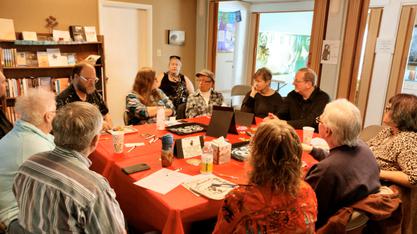 Chambana Death cafe March 4, 2017 was held at the Unity Church and Spiritual Center in Urbana, IL. There were 13 of us and six people were new and, some were not. There were about four no shows also.

Three people found us through the death cafe website and several through public FB event posting. Also the church advertised through their bulletin as well.

Eve joined us at the last death cafe and this time brought cake. She is an archaologist with the U of I and  has been involved in human remains excavation in IL among her many responsibilities.

Deb is a minister at the church. She was instrumental in arranging our use of the venue.  She was kind enough to provide coffee and water for everyone too. I think this church would have us back in the future. A couple of other members of the congregation were there.

People introduced themselves and said a little about themselves. They entertained the question of what they might say to Death in person. Someone pondered if Death like(s) his job. Another joked at one point Why do you always wear black clothes?

Discussion touched many topics. For instance one man talked about routinely taking family to visit the cememtery to see family whether or not they wanted to go and thinking about how age doesn't matter and that kids die too -  after his son's brush with death.

People laughed when someone asked if he had danced on his own grave yet since he ws gifted a plot in the cemetery and would be laid to rest by his mom. He was very enthusiastic to be at this event and sped on over so as not to miss it. Other discuseed how their families either did or did not ever go to cemeteries.

One lady said she had not attended a funeral until her father died. Her parents had sent her elsewhere when someone close to her died and never sat her down to explain. She just discovered they were not to be found again. I think she found that unsettling.

The table decor included death cartoon standees like the ones sometimes found on the dc facebook site. People liked them. I had brought some books on death to look at but told them nothing was for sale. I reiterated that I do not charge for facilitating a death cafe.

One woman asked "the nurses" in the crowd if the use of morphine blunted her mother's experience of death and that topic was discussed.

Other topics touched on what it is like to pick up the phone and mindlessly call a loved one who can no longer answer the phone. Some talked about how they can still communicate with their loved ones through otherwordly psychic type of experiences.

Someone said the dead are with you even if not present in life and, in response to a joking comment, don't have to pay for the theatre  ticket to go with you.

Several people noted psychic ability. One sees auras and stated she had predicted  an impending death due to this. Many related seeing family members or patients reaching out and talking to the unseen shortly before death.

One woman said her mom was abused by and afraid of her ex-husband and didn't want to encounter him as she died or after death and that she spent the last ten days of her life arguing with the spirit of the ex as her death approached. The son who died before her had apparently assured her that "HE" would meet on the other side not the ex. She was comforted.

One of the men said he finally visited a cemetery and wandered with headphones on and commented on how peaceful  and unhurried the experience was.

Some discussed what happens at or after death.For instance, iff death is similar to what we experience in life then an atheist might exist after death in a blanket of darkness, or similar. If a Christian who envisions heaven and pearly gates will experience that after death.

One mentioned his religion changing from childhood because that was a hellfire and damnation speech made at the funerals he had attended. His views had grown and changed over the years.

One person mentioned choosing your life before birth in order to learn something or do something in that life; others posited that one might want to come back to fulfill some spiritual purpose.

The popular TV show The Simpsoms has had at least 2 soul stealing or selling episodes and they were briefly mentioned to some laughter.

One woman's mom learned to swim at 60 and she asked how she could get out or get through dying and her daughter reminded her of this and said "just float" at which she seemed to relax.

Dementia and Alzheimers are diseases that several have encountered in parents  or patients. For family in particular this is difficult. There was discussion of how dementia patients make friends in the care unit and come to be together easing loneliness.

Forgetting about the death of a loved one was part of the discussionand how reminding a person with memory impairment of their spouses death (because they forget) tends to rewound them over and  over and is cruel.

DNR status and doctor's respect of or disrespect of patient/family wishes was discussed and one person noted that family members that try to change the plans have unfinished business of some sort to deal with in regards to the dying parent -  noting perhaps a child has been absent from the parent's life for years so they come in and try to run the show because they want to do something meaningful before the loved one dies.

A discussion about lunch at the graveside was started. It was said that it was a thing in the old days. I noted that I had been to a dumb/dead supper at a graveside five or six years ago as part of a Lithuanian tradition. It is most likely occurring less often now in the United States.

The absolute funniest story came from Deb who is a also nurse, a professional clown and part time minister. She said her mother, also a clown, was "very Jewish" and she chose to have her mother dressed in her clown make up and costume.

This upset the funeral director. She also had a specific number of balloons she was taking since the number echoed a tradition her mother had of giving that number of dollar bills for birthdays and other special occasions.

She put the balloons in the head limo that picked her up. On the way to the funeral home two of the balloons popped and she made the driver go by a party store and got two more balloons. The number was important to her.

The funeral director heard about this and said she would not be able to go off the route when the procession was in place. He was quite unhappy with the detour. She also said the music played at the funeral was too dreary so she insisted on other happier music.

We read 2 poems at the end while people were filling out evaluations. I didn't realize Raymond, my cohost, had planned to read one of mine. I write about death a lot. So I looked perplexed as I didn't quite remember it. I then read one I had written last week. I would not have done that had known he would read one of mine too. It was a tad odd.

Everyone completed evaluations Also one was difficult to read but we are blind. We figured it out. I had verbal permission from all for the picture I posted here.

At least 6 people were new. One thought he was dressed wrong and I had to assure him there was no dress code to attend. One woman suggested her small business location for DC noting it could not accomodate wheelchairs or walkers. I suggested she arrange a private event that i could help with but I haven't heard back from her yet.

Attendees wore a vast range of hats. Attending were paranormal, investigators  an archaeologist, three with ministerial duties, an auto plant worker, and one "regular guy". I am unsure about the others. People came from all over Illinois including Champaign, Urbana, St. Joe, Westville, Monticello and Chenoa. One drove 100 miles and another 40 and were really excited to be there.

Evaluations were completed by all. When asked if attending had changed their views on death answers included

-- no but very worthwhile

-- yes, made me think more of life after death

Overall the ratings were exceedingly positive.

For comfort all were comfortable and one said "at ease and welcomed." Remarks about how we could have made them more comfortable included "slippers" or "pillows on the chairs."

Facilitators ratings were overwhelmingly positive. One in particular noted "helpful and allowed us to take the conversation where it wanted to go."

Refreshments were agreeable and the location was well liked for parking, having plenty of room and being relaxing. Most people admitted they drove right past the church and had to turn around. The sign is a bit small. It was a bonding experience. :)

Everyone said they would attend another death cafe and recommend to friends. A suggestion was to have one at least every three months. I am hoping to host one every two months unless I find a regular place that doesn't charge for a space to use.

My apologies for the late evaluation. My vision is extremely poor, much worse than usual. Thank you for allowing me to continue this work.