A write up of Death Cafe Cape Town 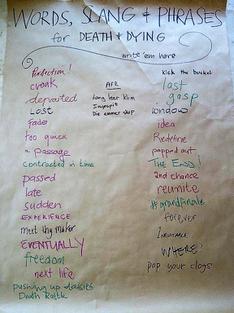 Thirty people attended our first Death Café at The Dining Room in Cape Town – the perfect venue. Mostly strangers to each other, the feedback (gathered afterwards via email) was very encouraging, and provided some good pointers to our next café, the date yet to be confirmed, either the 23rd of January or 6th of February, 2017.

People arrived (early!) and had the opportunity to write a word or slang phrase for death on the wall, or mingle while they waited for others. Already, there was an excitement in the room. Everyone chose a random slip of paper with a number on it – this was the number of your table. We used the salon model, with four at a table, sometimes three. We split spouses and partners and they seemed to like that, and the freedom it gave them.

From the get-go, it was amazing to witness people engage on a deep level with each other. One person said she appreciated that there was no small talk, that people simply got straight to the point. The facilitation was easy, moving around, checking in with attendees and my colleague, and lightly moving things along if one person seemed to be dominating at any table.  It was good to participate.

At cake time people were invited to swop their numbers with someone else, or keep them, it was up to them. Some groups didn’t want to break up, and one even spontaneously burst into song. Many people swopped contact details at the end of the evening. Perhaps the next one should start at 8pm, allowing people supper beforehand. Some people also travelled very far.

Feedback suggests that the group would have benefitted from a different question at half time. The “Who are you and what brought you here” was perfect for the first round, but there was a hunger for the conversation to go further. We asked the second configuration what they had learnt or re-discovered about themselves and their relationship with death in their first conversation. Perhaps, “What is a good death?” or “What is a good death and how could I have one?” might provide the edge and shift things at our next café.  Any suggestions would be welcome.

It was good not having alcohol, people said its absence kept them focussed. Also, they said food would have been a distraction. From the voluntary donations, we almost covered our costs.

A big thank you to all who showed up and shared and listened to each other, and to Jon and the Death Café community for enthusiastic guidance and support. Here are some bits of anonymous feedback.