Report on the Death Café at Café Rouge, Hampstead, London, on 14 October 2013 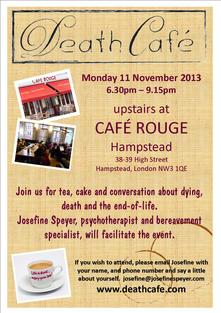 This Death Café was again fully booked in advance. Some people cancelled, some on the day whilst I was out and others just were not able to attend. Some emailed on the day and came along without me expecting them, one of them a young journalist from TimeOut magazine. Well, it all worked out fine on the night and we had a great evening together!

Philomena Corrigan (death doula) and Sharon Young (PdD student) and I each facilitated a table of about 6 – 9 people. Having intended to get started by 7pm after a 6.30pm arrival, we finally got settled and sorted by 7.15pm, much later than intended. It took all that time for everyone to have arrived and received the food and drink they ordered.

Our evening was in three parts: 1. Introductions around the tables with everyone telling their story of why they are here. A wide range of themes was discovered, such as how to talk to someone who is ill and dying? Is it ‘English’ to talk about dying? Keeping a stiff upper lip and what this has led to in people’s lives, past and present. Inspiring stories and sad stories of recent, sudden bereavements and expected deaths. A young friend dying abroad and being inspired by a care circle formed for her and rituals created after her death.

3. I called everyone to a plenary, coming together to form one large circle, inviting people to speak, reflecting on their experience of the night. Some most moving things were said, deeply appreciating the opportunity of this Death Café. Someone said Death Café is a thing like no other! Indeed!

I invited three men who had all come for the first time to write about their experience here. Dan was the youngest person, Martin the oldest, and Ed somewhere inbetween:

The concept of a death café was totally alien to me until my counsellor told me about them. After deciding that it would be good for my personal development, I felt that I should give it a chance.

Even though the concept sounded fairly straight forward, I still wasn’t entirely sure what to expect. My imagination was painting pictures of pale faced Goths and beret clad students talking in hushed tones about the futility of life!

So my initial preconception was blown away fairly quickly by how friendly the atmosphere actually was. Certainly, everyone had come to talk about death but it felt to me to be in the spirit of openness and a willingness to share other people’s experiences as much as their own.

If anything, the spirit of the death café seemed to have more to do with promoting living life to its fullest by acknowledging the simple but often ignored fact that life is finite.

I left feeling a strange mixture of emotions. On the one hand, I felt a sense of melancholy as perhaps is inevitable when being confronted with one’s own mortality. For me though, this melancholy was mixed with the feeling of being uplifted – I will die one day but with that knowledge comes a reminder of the fact that I am alive now.

I’ve felt more motivated than usual this week and I have already booked my place at another death café in November. I can’t help but feel that one cannot truly live without understanding that one will die. That is one of the few certainties that life has to offer. How we choose to deal with this truth is up to us.

I first heard of Death Café when I attended Death: A Festival For the Living, at The South Bank Centre in January 2012 and had wanted to attend myself ever since.

Eventually I got round to visiting the Death Café website and found one in Hampstead in early October hosted by Josefine Speyer, Co-founder and Patron of the Natural Death Centre.  Josefine was the perfect host for this event, greeting everyone warmly and allowed the discussions to unfold organically.

What surprised me most was how intimate the conversation felt, despite having only just met the other people at my table.  This gentle atmosphere allowed us to relax and talk openly.  What struck me afterwards was that I had just experienced something completely unique; something that I could not compare to anything else I did as part of my day-to-day life.  We go to book clubs, dinners with friends, talks and other social events, but this was not comparable.  It unlocked feelings and allowed me to discuss these in a way that afterwards left me feeling liberated and light-footed as I walked back toward the tube and my journey home.

I came to the Death Café for a number of reasons.  Because I notice that many of the deaths reported in the papers are of people of my own age or younger. Each year it gets more likely that I, or my wife, a brother or a sister, may die – especially as serious illness has come close, with its talk of survival statistics.

It’s easy to say to myself ‘I am not afraid of death’, but is that real?  Would I say the same if I knew I was going to die tomorrow, or next month? How much am I denying? Perhaps talking would help get closer to the real feelings that are hard to imagine.

I have had good experience – mostly with Quakers - of small groups where people talk informally about things that are important to them, so I liked what I knew of the format of evenings at the Death Café.

And so it was. We sat at a table of eight people, who included different ages, nationalities and – we soon discovered – reasons for wanting to talk about death. Each of us was invited to speak quite fully about our reasons for coming. Some were very surprising – such as a lifelong interest in dying and the dead, including its physical side.  Literally morbid, perhaps, but not at all alarming or repellent.

One or two had been recently bereaved – losing parents or a sibling, but discovering that it was possible to share feelings and memories, as they arose, with the surviving partner. For me, that story was the most memorable of the evening, because of the simple honesty of the emotion we heard about.

Our other stories quickly reached a level deeper than usual social chat, but still came more from the mind, I thought, than the heart.  I felt that after two sessions of about 45 minutes each we were still only starting on the subject. We all agreed that talking or even thinking about death was difficult in other contexts, and that this was a special opportunity.  But what is the ‘fear of death’ that makes it difficult?  That’s the question I want to tackle when I go to the next Death Café; I look forward to it.

What is your profession?

·      I wanted to prepare for my own death, learn about end of life issues. I enjoy it.

·      I wanted to prepare for my own death, learn about end of life issues. Learning to cope with my parents’ death when it comes.

·      Take some responsibility for my own death.

·      I want to prepare for my wife’s and my own death and to explore thoughts and feelings to break through possible denial.

·      I have a life limiting illness, have been bereaved and want to prepare for my own death.

·      I have been bereaved and want to prepare for my own death.

What did you appreciate about the event?

·      Openness and space to listen and express.

·      Openness, warm atmosphere, sharing thoughts and respect for others.

·      Meeting with others who want to talk about death.

·      The honest warm atmosphere and the freedom to talk about a topic most people shy away from.

·      The variety of people and motives. All spoke honestly about their own motives.

·      Opportunity to hear people’s concerns and to share reflections.

·      The openness and good facilitation.

Was there any aspect of the event you were dissatisfied with or felt uncomfortable about and wished it had been different in some way, and how?

·      No – I would have liked another theme for the other half rather than the same focus.

·      I don’t think we got at all deep (except one person recently bereaved).

How would you describe your experience of the event?

·      I find the evening went beyond my expectations in a positive way. The sense of belonging was overwhelming because death is the single thing we all have in common. I learned a lot about other people’s views about death and that will help me to prepare more for mine when it comes.

·      I enjoyed it. I feel inspired by listening to others.

·      I have enjoyed the openness of all participants. I have learned more once again about my own reflections about death and dying.

·      Positive, interested, enjoyable contacts with people and their lives. Sense that we haven’t got very far.

·      Felt very much part of a group of like minded people and therefore able to express myself freely. Appreciate the non-judgemental attitudes.

Do you, or are you planning to, host a Death Café? If so, where?

·      Contemplating to holding one in Brixton

·      Yes, thinking about one for young children.

'Saying Goodbye' is a 16 minute multimedia project that examines the emotional, social, and spiritual aspects of what it’s like to say goodbye to a loved one at the end of their life's journey. It’s something we will all have to do. This is the story of a retired London GP who had to let her husband go - but who found ways of bringing him back. Stills, video, lighting, audio, graphics, interviews and production - Paolo Black https://vimeo.com/76168468