A write up of Highcliffe Death Cafe 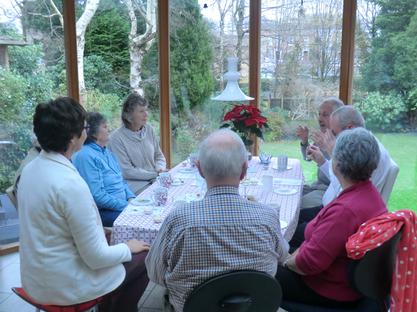 Highcliffe Death Café had another booming afternoon meeting, the last of 2015. Eight all together, whereof four new members turned up. One gentleman had been travelling from midmorning by public transport from right the other end of Dorset. Among us was a couple, who have been interested in the topic of death for more than 30 years, partly through work related contacts and partly through the big wide gaping hole they have seen customer/patients are afraid of as they do not know how to approach this empty fearful place which for many death is. Among also an author of: A Guide to Natural Burial Paperback – 25 Jun 2010 by Ken West (Author)  and R.I.P. Off!: Or the British Way of Death Paperback – 1 Oct 2013.

The discussion today was flowing from one subject to the other in a beautiful stream. We were all concerned by one members wish and plan to end his life. Most of the café members today were of the opinion that taken one’s own life is totally acceptable and likewise euthanasia is everybody’s right. We were able to understand why this member so much felt he had enough, meanwhile we gently encouraged him to look at his demons and see all the gift he gives to other people by his present. Wishing everybody a peaceful Christmas.