A write up of The 3rd PDX Death Cafe - REGISTRATION CLOSED 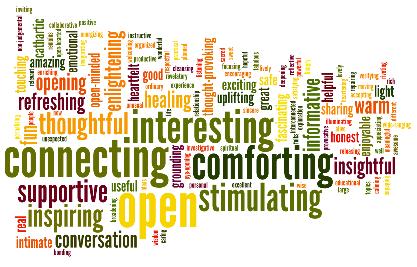 In June they braved near 100-hundred degree heat; on September 29th it was torrential rains. Despite the dramatic weather, over 75 brave and curious souls gathered for the 3rd PDX Death Café, hosted by the Adult Education Program of the First Unitarian Church in downtown Portland.

An incredible 72 guests filled out evaluation forms; 73% of them were first-timers. Of those reporting how they had heard about the event, half cited a friend or other personal referral; one-quarter had heard about it through the host church; and one-quarter through the internet, Facebook, or media reports of Death Cafés in other communities.

Feedback once again was touching and overwhelmingly positive. The most frequent descriptors volunteered were: open, connecting, comforting, interesting, stimulating, thoughtful, supportive, inspiring, informative. These reflect themes we’ve heard in our first two Cafés; this time, though, we also got heard the word fun from three people! Of those answering the question, 100% said they would consider attending a future Death Café and/or recommend it to friends and family.

§  Facilitator Don Tarbutton opened with an orientation to Death Café principles and our format, then offered a poem he had written and invited a few moments of silent reflection.

§  Guests were seated at tables of 4-6, focusing on a topic of their choice: Getting Ready, Emotionally & Spiritually; Getting Ready, Practically Speaking; Beliefs About Death; Changing Cultural Norms Around Death; Grief, Mourning & Remembering Well; and Open Conversation.

§  After a break, guests were reseated at new tables for a second round of discussion.

§  As we got settled and during the break, guests posted their thoughts on wall posters, responding to the prompts: What’s the first word that comes to mind when you think about death?One of my earliest memories of being aware of death is…Before I die, I want to…More people would talk about death if…I choose to talk about death because…I will die, and that means…

As with our first two PDX Cafés, participants were near unanimous in rating the event structure, facilitation, and overall experience very highly, and agreeing that, “The event had a positive impact on me” and “It was helpful for me to meet people with different viewpoints.” The feedback from this 3rd Café continues to confirm the trend noted by US Death Cafe pioneer Lizzy Miles: that the primary impact is NOT to change perspectives on death and dying. About half of respondents were neutral on that question and nearly 20% said their perspective had NOT changed as a result of participating – however, one-third did report that “My perspective on death and dying has changed as a result of participating in this event.”

Feedback again confirmed that the greatest value seems to lie simply in open, intimate exchange with other people. As one person wrote, “It was a huge relief to have space to be real and talk with others about such profound topics.” Another said, “It was very, very comforting; it clarified and illuminated some of my thoughts and feelings about death.” Comments on “the most enjoyable aspect of the event” reflected several core themes:

§  Speaking Up: “Sharing thoughts I haven’t talked about with others.” “Having space to talk about my feelings with people who were supportive and non-judgmental.” “Sharing with people who like the topic.” “I liked that we sat with people we didn’t know and completely opened up.”

§Listening: “Listening to others’ stories.” “Hearing from people from completely different walks of life.”

§  Connecting: “Frank talk between strangers in a safe environment.” “Connecting with people and reflecting on my own experience through conversation.” “The sharing of thoughts and views helped reassure my own uncertainties.” “Seeing the interest of folks in end of life.” “Getting out of my head; meeting new people with rich thoughts and experiences. I am so grateful for this experience; great that you encouraged us to sit at a table full of strangers!”

§  Welcoming: “Family friendly.” “Very nice setting – well-run, good space.” “The Death Café was well organized, respectful, and inviting. I felt welcomed and affirmed by our conversations.” “This was even better than I anticipated – thank you.”

Everyone loved the small group discussion format (“Very conducive to great conversation and insights”) although the noise level was an issue for some. Respondents liked the mix of structured topics and discussion starters with an open conversational format. Five people wished for more discussion time. One noted that, “Multicultural topics were not actively engaged.”

Most tables had a volunteer host who helped facilitate discussion while joining in as a participant. Earning near universal praise, they were described as: very helpful, inclusive, knowledgeable, diplomatic, experienced, very caring, great interplay and listening skills, stimulated the group, only enough to encourage interaction, just right.

A few respondents wanted more structure – either through ensuring that every table had a moderator, staying more strictly “on topic,” or offering more frequent reminders to listen without questions or suggestions until the person is done speaking. One person suggested that a host take notes at each table, producing a more structured collection of thoughts like a World Café. And one dissenter said, “Having facilitators at tables felt restricting.”

One person addressed an issue that’s of vital interest to Death Café organizers – avoiding commercial promotion while enabling those who are interested to connect to resources. This person wrote, “One of the hosts has a business dealing with death. I’d rather not have a host who makes their living in the field of death and dying – the line between discussing what you do and promoting your business is too fine a line to walk in this sort of event.” As hosts, we agree to “leave our credentials at the door” though participating in discussion may include reference to relevant experiences, including experiences in a professional context. I discussed this question early on with UK Death Café founder Jon Underwood; his hope is that Death Cafés, along with conversation, provide a venue where folks can learn about community resources they might not otherwise encounter. We’ve attempted to foster this while maintaining a non-commercial environment by creating a resource table and reiterating the core Death Café principles verbally and in writing. Further feedback and discussion about this balancing act is welcome.

This was the first PDX Death Café held in a conference room; the first two were in restaurants. While the venue was a church, it’s one frequently used for secular and ecumenical events. The only critical comments about the location related to parking. We received a few favorable comments about the dessert potluck (and an incredible array of offerings!); only one person felt there were “too many sweets!”

§  The percentage of male participants crept up to 27% (it was 21% at our first two Cafés); 12% chose not to identify their gender.

§  Several commented on the value of being with people of varied ages. While we haven’t recaptured the strong 25-34 year old presence of our first Café, the numbers of those under 45 and over 75 increased.§  When asked, “How would you describe your faith/ religion/ belief system?” 18% chose not to answer. Not surprisingly, the most common response was Unitarian (24%), given the location of the event and the great job the Adult Ed program had done promoting it through the church bulletin. Another 14% described themselves as Agnostic, with 15% calling themselves Spiritual or Interfatih and another 15%, Buddhist. Two people described their beliefs as “Evolving” – one a female between the ages of 25-34, the other a 75-84 year old man. We also had four Pagans, a pair of Sufis, a pair of Humanists, and two who called themselves “Open”. The remainder were singular responses: Christian, Catholic, Catholic-Buddhist, Jewish-Buddhist, Atheist, Non-Denominational, Secular, Animist-Jack Mormon, and “never ending search”.

§  While registration at one point had topped 100, late cancellations brought our expected number down a bit. In the end, our no-show rate was less than 20%. As mentioned, nearly three-quarters of participants were first-timers.

Our Next PDX Death Café

§  Thanks to those who offered suggestions for future development, including: “Postings/ talks about how we can change cultural norms, ie how to bring this conversation into our own lives to help others.” “Legal resources, ie an estate attorney who can represent a disabled person in will & estate settlement.” “It would be perfect if it were a Facebook group, not just a page, ie a forum for ongoing discussion.”

§  There are other Death Cafes in the works in the metro area. If you're organizing one and want me to share the details with this list and our Facebook friends, just let me know.

What’s the first word that comes to mind when you think about death?

One of my earliest memories of being aware of death is…

“My parakeet dying; finding it on the bottom of its cage on a cold winter morning.” “Seeing my grandfather in the hospital & on a ventilator (Swallowed up by the white sheets, pillows, blankets and walls.)” “My mother saying I couldn’t go to the funeral of a schoolmate because it would scare me.” “Being woken up as a child by my mother to be told that my great grandmother had died.” “Using my BB gun as a young boy against a possum.”

Before I die, I want to…

“VISIT 10 SACRED (TO ME) PLACES.” “Let go of the small stuff.” “Live!” “AWAKEN TO THE JOY OF EACH MOMENT, POSITIVE OR NEGATIVE.” “See my daughter grow up.” “Feel complete by living & loving well.”

More people would talk about death if…

“It were a true CELEBRATION of a life WELL lived.” “THE MEANING + EXPERIENCE OF BEING ALIVE WERE MORE APPARENT.” “They were here!” “Our society wasn’t SO anti-death.” “--If we shared our own experiences openly first.” “Others would want to listen.”

I choose to talk about death because…

Iit is reality for you & me.” “LIFE CAN BE BETTER ENJOYED BY CONTEMPLATING ITS OPPOSITE.” “It’s something all humans experience.” “It is definitely coming!” “To share a fear is to remove its power.” “THE LAST ‘TABOO’MUST FAIL.” “Birth + Death are a cycle: Life endures” “I want to be better able to help people who are hurting from it.” “I WANT TO MAKE IT MORE REAL” “More people in my life are experiencing life threatening illnesses and unprepared for the unknown.” “I KNOW I WILL DIE, BUT I DON’T WANT TO....and I’m next…”

I will die, and that means…