Report of the Death Cafe on 29 July 2013 at Cafe Rouge, Hampstead, London, UK 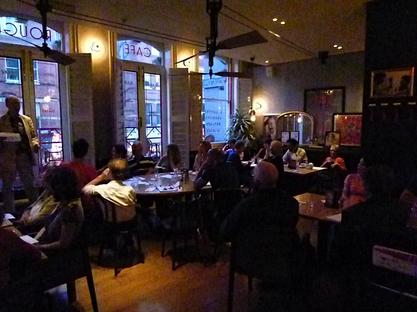 Report on the Death Café at Café Rouge, Hampstead, London, on 29 July 2013 by Josefine Speyer

The July Death Cafe at Café Rouge in Hampstead was a success. For the first time it was fully booked a week in advance, in fact I had over booked it, allowing for several cancellations on the day.

Thank you to Liz Wong (Death Doula), David Spofforth  (Interfaith Minister) and Celia Urbach (Psychotherapist) who agreed to help me facilitate – each of us to a table - which ensured that everyone had a chance to speak. Feedback in June suggested that this would help.

As the host, I welcomed everybody and set the scene for the evening with introductions and general guidance.

At the beginning of the second half of the evening, I invite everyone to contemplate the question, “What would be your ideal death?”, and then to talk about this in pairs. ‘The room then buzzes with animated talk!  It is great for everyone to have the chance to talk one-to-one.

I paired up with a young man who had come back late after the break and did not have a partner. I was taken aback by his response to the question. He said he did not care how he died. “Not even if you can have a choice?”  He said, no, it was more important what his family would do afterwards.

When we rejoined the table, relaying what had come up for people, it was a most intimate and moving circle, with a great sense of warmth and acceptance of everyone and an incredible openness amongst the group.

Before drawing the evening to a close, I asked everyone to listen to a story, which David read to us standing on the steps to the balcony. It is an amusing, philosophical story about what creates a meaningful, rich life.

Then each table had a closing round where everyone had a last say, to express how they felt at the end of this Death Café experience. I was very moved by the atmosphere that was generated around our table. It felt like a deep bond of humanity. I think this feeling was shared by others in the room.

From an email the next day:

Thank you so much again for offering me a place last night. It was really good to experience the event and it helps guide the decision about offering a Death Cafe locally in North Hertfordshire.

There was a rather extraordinary gathering around the table after the exercise (What would be your ideal death?).  Four of us were Jewish and we shared a very similar legacy regarding the holocaust and the pogroms - and how it led us to the work we do now. That meeting of souls was a very beautiful gift.

From Suzanne Michal, healer and author:

" My life has been shaped, destroyed and reborn by losing many close people in my life including my husband, sister, soul brother and friends. It has been a lonely path to recover and learn that ultimately death is a gift as it makes us cherish life. But now I have found the Death Cafe where I have met other people who want to share their stories and questions around death. This has proven to be the most wonderful experience. This very special event has opened my horizons, challenged me emotionally and opened my heart in a very big way. It is no wonder at the end of it, nobody wanted to leave, everybody was hugging with deep, deep gratitude for this unique opportunity to talk about death! "

From a blog by CJ Swaby:

I attended my first Death Cafe this week. Now I know what you are thinking, But I bet you are curious right?  When I told my friends where I was heading that Monday evening, they looked at me bemused. Behind the contorted face, their confusion gave birth to questions such as, "Death Cafe? What's that then?"  Or "You mean you talk about death all night? Isn't that depressing?"   Well actually it's not.

I have to admit, as I entered Cafe Rouge on Hampstead High Street that Monday evening, I was bubbling with curiosity. I was late.  As I clambered up the stairs to the intimate room at the top, the host, Josefine Speyer, was already setting the stage for the evening with an openness, calm, respect and gentleness that seemed to give the attendees permission to open up to complete strangers about why they were attending, and their personal experience.

So why do we even need Death Cafes? That's a great question, and lets be honest, as one of my more eager friends put it,
"Oh wow! that is rather interesting. Conversations about death, without people thinking your suicidal or crazy."  The question of death ultimately ties in with it the question of life.  Now this was no counselling session, but it opened up a space for people to express their inner most thoughts and feelings, fears, hopes, insecurities, and also what they loved most about life too.

The Death Cafe is a non-judgemental place that brings into sharp perspective our own mortality, and unifies us in our experience, in that death does not discriminate.  It is not prejudice. Is does not care about how much you earn, what sex you are, what race you are, or even your sexuality. In this powerful, shared experience, through our conversations we were able to get back in touch, and connect profoundly with not only ourselves, but complete strangers, if just for a brief moment in time.

I found myself recounting tales of my grandmothers death, and that of my brothers. I even recited my brothers poems that I have tattooed on both my legs.  What was striking to me was the difference between how I related to these stories, compared to if I had told them to you six or seven years ago.  Before where there was pain, anguish and suffering. Now I can remember them with a smile and be really present to the love I have for them both, and the gratitude that I have for having had them in my life, others hadn't. There were those who had a terminal illness and were battling for their own right to die. There were those who were still in obvious pain, and those who were at peace.  The age group was diverse. Their stories equally diverse and mind blowing.  It was a fascinating and precious experience that expanded my perception, and touched me profoundly.  So to answer the question why do we need a Death Cafe? Perhaps to inject a little life into death.