A write up of Columbus Ohio Death Cafe #9 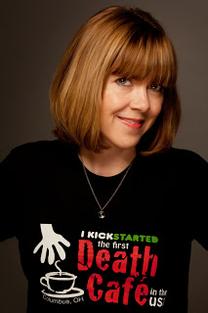 On May 8, I was part of a radio show on WOSU, All Sides with Ann Fisher: Grave Matters: Dealing with Death which talked about a few aspects of death. Joshua Slocum, with Funeral Consumers Alliance talked about challenges with selecting a funeral home and planning a funeral.  Then I shared the story about the Death Café history, evolution and philosophy.  After me, Susan Soper, author of Obit Kit, explored the benefits of writing your own obituary.  I was so glad that we had an hour to talk about death and dying.  I discovered how popular the radio show was during the night of our eleventh Death Café, when many of the attendees came because they had heard the program and wanted to participate in the Death Café conversation.  The event was hosted at a Westerville Panera in their community room.  It’s a cozy place and the managers are now used to us “death” people coming in.
We had seventeen attendees, including a hospice chaplain, a massage therapist, a local member of the Funeral Consumers Alliance, a Reiki practitioner, and a surgical resident who is confronted with end of life decisions with his patients on a daily basis.  Then of course, there were also people who had experienced loss.  I always am very careful to be sure that attendees understand that the Death Café is not a grief support group.  I don’t want there to be unmet expectations.  Fortunately, because many were there because they had heard my 15 minute Death Café radio interview, participants were well aware of the philosophy and the purpose of the Death Café gathering.
One attendee came because she is a friend of mine and it was my birthday.  I was nervous when I filled the open seat across from her with someone who had lost a twin.  My friend is a twin and I thought it would be hard for her to hear about the loss experience of another twin.  The woman across from her was very involved in a support group called Twinless Twins.   The universe works in mysterious ways I guess.  In the beginning my friend held back a bit, but then about an hour into the experience, I saw her sharing and engaged in conversation.  The Death Café experience is magic.
I cannot say enough how much I love the diversity of conversation that comes up at the events.  It is fascinating.  Two separate people at two different tables raved about Eben Alexander’s book Proof of Heaven.  If you haven’t read it, it is about a neuroscientist’s near death experience.  I have not read the book myself yet, but given the positive endorsements, I’m encouraged to buy a copy.
One of the conversations that interested me was the discussion about the timing of when people die and how some family members chose to die when no one is present.  In my hospice work, we have a goal for no one to die alone, but some people seem to prefer that and pass when the family member stepped out of the room.  As one participant suggested, perhaps dying is a private thing like going to the bathroom…”Don’t look, I’m going to die.”
Another conversation suggested that our loved ones are here as long as they feel they are needed.  “Life is sustained by a sense of purpose.”  That is a powerful statement.
One woman indicated her desire to have a DNR even though she does not have a terminal illness.  She still feels that if her heart stops, then it’s her time to go.  She found out that the doctors would not allow for her to have one.  She had a sense of humor about the absurdity of the rule.  “You can’t get a DNR unless you’re terminal.  Well guess what, LIFE is terminal.”

Given that many of the attendees had heard the Ann Fisher broadcast, the subject of funeral costs and the power of writing your own obituaries was also discussed.