A write up of 16th Death Cafe Hampstead, London, UK 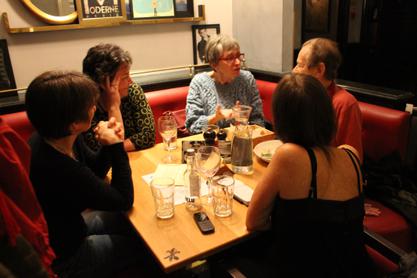 This really was our 17th Death Cafe Hampstead (and not the 16th)!

The stats for this write up are not complete.  To be added later. Sorry, the time flew by since holding the Death Café, taken up with other things.  Josefine

23 booked to attend this Death Café.

Overall, how would you rate this event?

This is how people described their experience of this Death Café:

Illuminating of some feelings I have about my own age and the old age of others.  Unexpectedly I found the comments in the large combined group more freely expressed than in the small.   This does not mean I would reduce the time of the smaller groupings.

One aspect of ageing I found myself unable to express.  This gives me food for thought.  I have no idea as to how this could be improved other than in myself.  Well – perhaps there could be a short period in pairs of twos.

Very Therapeutic! As a recently bereaved person (my mother died 6 months ago).   I needed to talk about the experience and to hear other people’s stories.

As an introduction I felt it hit the right note for me.  Arts Administrator; female 57

Very thought provoking event, interesting people.  Table well “moderated”. Not what I thought it would be, but not sure what I expected.  It’s so good to be able to talk about profoundly important things when so much of daily life is very superficial.

Perhaps a circle in the second part (Plenary) could be different? I wanted more people to speak. Not sure. Writer; female 57

Sat with five ladies we talked about others who are near death and how to prepare for their death, and broaching the subject with them.  We talked of why people commit suicide, and the sometimes pointless of it.  As always, the same and different.  Business Analyst; male 42

Our group had various experiences about issues on death and dying.  We had interesting conversations.  Librarian; female 48

My second time here and I found the conversations profound and enlightening.  Lecturer/Aroma therapist; female 38

We spoke about the evolution of funerals….flowers are now considered an acceptable form of grief expression.  Female

Varied experiences and ideas discussed.  Interesting discussion on the subject of being able to choose to die. Office Worker; Male 70

Rather frustrating.I feel that it would have helped if the facilitator has ‘managed’ the individuals contributing to the discussion with regards to time permitting a wider/fuller discussion to develop between the individuals. Nurse; female 61

By email received next day:

When I returned home last night my daughter said “I can see that it went well; you are looking so much better.  It’s done you good.  You must go back again to the Death Cafe!”.

And it’s true; I do feel like a weight has been lifted from my shoulders.  Also, I had not realised just how lonely I had felt recently, not feeling able to talk to my family or friends about the thoughts and feelings that have arisen since the death of my mother six months ago.   I felt so comfortable sharing these thoughts and feelings with the four kind people at my table.  And I was fascinated to hear their different stories and insights.  I had a sense that everyone was being honest and truthful and it was a joy to be able to freely share my personal experiences with them.

This felt like the tip of the iceberg and I would like the opportunity to return.  If you have a space available on Monday 1st December I would love to be included.

Thank you so much for this valuable service you have provided; it is very much appreciated.

And, most of all, thank you for your lovely gentle warm welcome last night; it made me feel genuinely welcome as part of the group.  I am sure that this is one of the reasons that everyone felt so ready to share openly with each other.

1 x I have a life-limiting illness

5 x I have been bereaved

3  x I wish to learn about end of life issues

•  Daughter has a life-limiting illness

• Long standing interest in this topic

• I work with the bereaved

• I wish to learn how better to support my dying friend

• I felt drawn to come, life seems to be getting shorter, thought I am fit and well

Catholic – none but curious and interested in different beliefs and systems

Jeanne Davis wrote a short article about her experience of attending our Death Café in October: http://www.laterlife.com/features/beyond-the-headlines-november13.htm

Each month our resident writer and commentator Jeanne Davis goes behind recent news stories to comment on various ideas and subjects that have special resonance for our age group.

Written in her usual thought provoking and entertaining style, we know you will enjoy this addition every month.

After writing about death cafes the past few months, I have now attended one for first-hand experience.  And what a worthwhile experience it was.

We gathered on a balmy October evening in an upstairs room at the Café Rouge in Hampstead.  There were 30 attendees, the average age was 50.  The women ranged from 26-82; the men 50-82.

At first glance it could have been a neighbourhood gathering to discuss a proposed project – a school playground, a campaign to keep a library open, new recycling restrictions.  But we, mostly strangers to each other, had gathered here to talk about death.

While sipping tea or coffee, or wine you could order if you wished, we were asked to introduce ourselves and briefly tell why we had come.  At my table, there was a retired psychiatrist, a young neurologist, a songwriter, a hospice worker, a woman who had been a physiotherapist, but was now a lawyer studying the law on assisted suicide.  And a management consultant.

The retired psychiatrist asked if we could help him with a current problem he was grappling with.  He wanted to sort out an accumulation of a lifetime of articles he had written, of family photos, of files on subjects that interested him.  What should he leave for posterity, what would be of no interest to anyone?  He had also decided he would put all these mementos on memory sticks, a tidy way of leaving little clutter.

The group was sympathetic, but did want to make some suggestions.  I thought it would be a pity to digitalise the photos.  It was always so illuminating on shows such as Who Do You Think You Are? to look at the old photographs of generations ago, faded but evocative, making those forebears so very real.  Without the physical evidence in your hand it would be a different experience.

An actress said she was now surrounded by boxes and boxes of her mother and father’s memorabilia. They had both died a year before leaving all their possessions in situ.  She was an only child left with the sorting to do.  She was not happy about it.

The topic that connected everyone was given to us by the facilitator:  How did we envision our own death, what would we like it to be?  The answers were as varied as the individuals.  All agreed that they did not want to suffer in pain too long.  Ideally they would like to have six weeks to put their affairs in order.  One 82-year-old said rather smugly she has already done this as she was in her advancing years.

As to whether we wanted family or friends or both to be with us at the final moment, some did want to be able to say goodbye to their children to tell them of their love and that they didn’t mind going.  The young neurologist said he planned to control the whole event.  He would invite his closest friends, play wild and loud rock music, offer drink and at the moment he chose he would pick up the morphine needle he had close by and expire peacefully into the night.

The hospice worker, who had seen so many at the end of life, was calm and not afraid.  “I am a Christian,” she said. “I will be waiting for all of you in Heaven.”

Guilt reared its troubling head.  The management consultant told the story about his father’s last days.  Visiting his father in hospital for what seemed like an extended stay, he became bored and told his father he had to leave but would be back the next day.  His father said “Won’t you please stay a little longer.” He didn’t and when he got the news the following day that his father had died, he was fraught with remorse.  The hospice worker offered some comforting advice.  “We do what we do at the moment,” she said. “You didn’t know he was going to die.”  What if he hadn’t died the next day? After 14 years of guilt, perhaps he derived some comfort from this thought.

When asked by the facilitator: “What did you appreciate about the event?”  Most agreed in the words of one attendee that it was "the relaxed ambience, the instant rapport at our table, the honesty of the discussions and the listening courtesy of the participants.”

“I have an incurable and aggressive cancer,” wrote another participant. “I found it liberating to talk about my death and wishes for my death to strangers who were so open to talking about the subject.  I did not experience the same emotional constraints compared to talking to people I love and who love me.”

For the mother whose 18-year-old daughter had died five years earlier, it was a relief to talk about her feelings. “I could come here and feel comfortable  sharing thoughts.” Her husband, fearful it might affect their younger daughter, found it too difficult to talk about their irretrievable loss.

It was life-affirming, too, concluded others.   I had concerns and was searching for answers.  I have gone away with some useful thoughts, especially on making the most of my finite life.

To date: there have been 170 cafes held throughout the UK.  To find out more go to www.deathcafe.com. 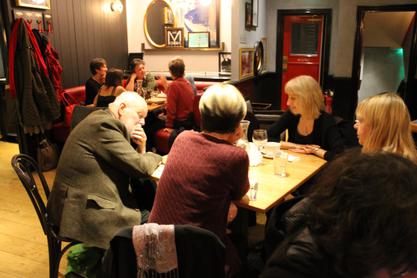 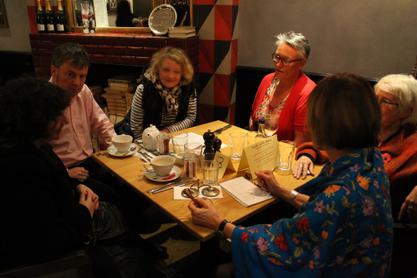 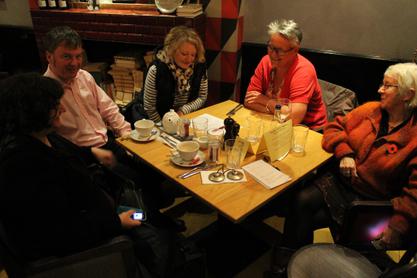