A write up of First LGBT Death Cafe in the US! 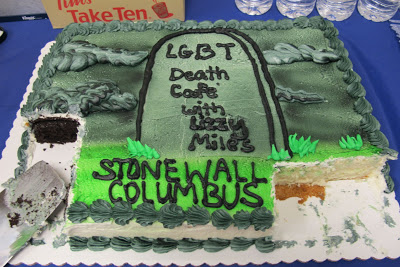 The First LGBT Death Café in the United States

It was raining buckets on the evening that we had our first LGBT Death Café.  The event was hosted in partnership with Stonewall Columbus, an organization that has been serving the central Ohio LGBT community with programs and services for over thirty years.  I was so grateful that they agreed to co-organize this pilot program.

A funny side note about our cake for the event.  Lori Gum, my co-facilitator and the Stonewall Program Director, ordered it.  She requested that it  had tombstones, but a blue sky.  The cake decorator automatically asked if it was for Halloween.  Lori said no, and she told them it was for a Death Café event.  She explained that it was not to be dark, but sunny.  Well, when it was done, we still got the gray skies.  Some people just can’t grasp the concept that a Death Café is not morbid.

People have asked me why I set up a separate LGBT-specific Death Café.  Why is it needed?  The answer is that sadly, there are still enough people out there who ‘judge’ others who are different from themselves.  The benefit of having an LGBT-specific Death Café is that it creates a safe place for the LGBT community so that they can feel more comfortable sharing in an environment where they won’t have to explain or justify themselves or how they live their lives.

Since this was to be the fourth Death Café that I hosted, I had some expectations for how the evening might go.  The prior Death Cafés had been consistently unique.  That is to say that the nature of the conversations at each event varied depending on the topics brought up by the attendees.

I was not sure what to expect at a Death Café program that was geared exclusively towards the LGBT population.  I wanted to do it, as I consider myself to be a strong ally for LGBT issues.  I have many friends and a couple of family members that identify as LGBT, and I felt I was well versed on national issues concerning equal rights for the LGBT population.  Despite how much I thought I knew, I am now forever changed as a result of participating in this event.

What took me by surprise was the intimacy of the stories that were told.  Within minutes, complete strangers were opening up and baring their souls.  I have said before, and I will reiterate now, that there is something magical about the Death Café experience.  It creates an environment of caring and warmth.  I’ve been told by a few attendees that they credit me with creating the warm environment, but I don’t know that I want to take credit.

The stories I heard at this LGBT Death Café were… intense.  There were so many stories, either direct or indirect about families fiercely rejecting their teenage children once the child revealed their sexuality.  This ultimately translated to a desire to die.  Several attendees had themselves felt suicidal at times, knew someone else who was suicidal, or knew someone who had committed suicide.  All of these suicidal ideations seemed to come from familial rejection.  I heard the pain in the attendees’ voices as they told their stories.

Over the years, I have been along for the ride as friends came out of the closet.  None of my friends, thankfully, had the severe rejection that was described by some of the attendees.  At least not to my knowledge.  This Death Café made me realize that I don’t know as much as I thought I did.  I was in awe of the challenges that these attendees had endured and overcome.

Although the conversation was serious at first, as the evening progressed, I heard hope.  We shared stories about how things are getting better for the LGBT population.  Slowly.

When we combined our small groups into one large group, the mood lightened even more.  We had debates over cremation versus burial.  Roses versus daisies.  What we would want to be wearing in our casket.

I was happy to be able to inform the group about the Body Disposition form that I had just learned about from a local funeral director.  No one had heard of it.  Most people assume that if you have a designated Power of Attorney that the designee will be able to make decisions regarding your funeral arrangements.  Actually, the decision on what happens to your body after you die goes back to next-of-kin.  This is relevant for the LGBT population who may be estranged from their family.  (Note, the laws related to body disposition vary by state.)

Survey results from this LGBT Death Café were the highest of all of the events held in Columbus thus far.  There was a bonding experience that went beyond the general Death Café events.  The most commonly stated reason for liking the event was that it was an open, honest conversation.  All of the attendees said they would recommend the event and would attend a future LGBT Death Café event.

There will be future LGBT Death Cafés and general Death Cafés in Columbus.  Please check back here for updates.