Report back from first US Death Cafe

A write up of First Death Cafe in the US! 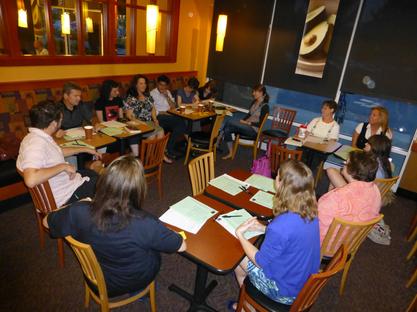 Thursday night’s Death Café event in Columbus, Ohio was a pleasant way to spend the evening.  Although it was hot and muggy outside, 13 brave participants came to gather with strangers to talk about death.

More than half of the attendees who RSVP’d ended up not attending.  Those in attendance could relate, and described their own nervousness about what the evening would entail.    However, as we sat down and began to talk with one another, the tensions eased and the conversation flowed.

We talked about a wide variety of topics under the sun including but not at all limited to: caregiving responsibilities , funeral customs, obituaries, legacies, hospice, regrets, advanced directives, ironic ways to die, and cultural differences in philosophies of death.

One attendee said the event was morbid, depressing and weird and then put a smiley face with a “just kidding.”

Another attendee described his response to the event,  “This was a great experience.  I was engrossed with the richness, quality and sincerity of the other participants.  Conversation is fluid & freeflowing & yet respectful and productive.”

None of the attendees could possibly have anticipated that three hours after the event, there would be another mass killing tragedy in the national news in Aurora, Colorado.  Our hearts go out to the survivors and the victim’s families.

A hearty thank you goes to the Kickstarter donors who made this event possible: