A write up of The 2nd PDX Death Cafe 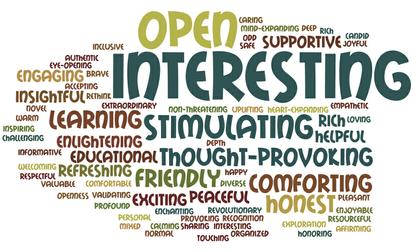 Despite near 100-hundred degree weather, our 2nd PDX Death Café drew an astonishing 58 folks to the cool environs of Cyril’s at the Clay Pigeon Winery. You can see what participants had to say about the experience in the word cloud posted on our page (the bigger the word, the more frequently mentioned). Interesting, open, stimulating, comforting, honest, thought-provoking, and friendly were the descriptors that led the pack. Nearly everyone completed an evaluation form. All but two people indicated that they would consider attending a future Death Café and would recommend it to friends and family.

What We Served Up

§  We opened with some words by spiritual activist and Orphan Wisdom founder Stephen Jenkinson on "how we care for the dying people in our midst, and how we die when it is our turn." http://orphanwisdom.com/teachings/care-of-the-dying/

§  At tables of 4-5, guests began with an "Appetizer Course" - sharing why they had chosen to spend their Sunday afternoon at something called the Death Cafe.

§  Then they selected an "Entree Course" resulting in one table discussion on the Practicalities of Getting Ready; two tables each on Beliefs About Death, Remembering Well, and "Potluck" (open conversation); and a whopping four tables devoted to "Getting Ready, Emotionally & Spiritually".

As with our first PDX Cafe, participants overwhelmingly rated the event structure, facilitation, and overall experience very highly. Continuing the trend noted by US Death Cafe pioneer Lizzy Miles, participants report that the primary impact is NOT to change their perspectives on death and dying: nearly 50% were neutral on that question, while nearly 20% said their perspective had NOT changed as a result of participating. And while 62% reported feeling more comfortable talking about death and dying after the Cafe (33% strongly agreeing with this statement), 36% were neutral on the question.

Feedback again confirmed that the greatest value seems to lie simply in open, intimate exchange with other people. Comments on "the most enjoyable aspect of the event" included:

§  Being able to talk – a lot of people don’t even want to talk about it.

§  Meeting such a diverse group of people who are open to discussing death.

§  Meeting so many people who are doing good work in the community.

§  Hearing different viewpoints from people with unique background and experiences.

§  The openness and honesty of people’s sharing.

§  Having been to the last one, I still felt I received new perspectives on death. It is a truly multi-faceted subject and meeting new people is great.

Others spoke to the tone that was set: The environment and atmosphere was lovely. The right kind of vibe and a safe, respectful, environment. Safe structure created.

For some, the size itself was a high point: Seeing the turnout and level of interest. I like the large size; I like the vibe of something more than a small-group discussion.

§  Three-quarters of participants were first-timers.

§  As with our 1st PDX Death Café, 21% of those indicating gender on their evaluation form were male; 79% female.

§  Of those who answered the question “How would you describe your faith/ religion/ belief system?” about one-third said “spiritual” or “interfaith”. Three identified as atheist and one as not religious. Three were Buddhist; two were Unitarian; and two were agnostic with an eastern or humanitarian twist. Two listed nature-based spirituality; one named The Goddess; and one, Wiccan/Unitarian. Other responses were New Thought, Jewish/Bahai, Catholic, Christian, and “Christian but not legalistic”. One person said “open,” another said “evolving” and one simply responded “Good question!”

§  While registration at one point had topped 75, late cancellations brought our expected number down a bit. In the end, our no-show rate was less than 20%.

How Did You Hear About PDX Death Cafe?

42% from friends, family, or a cohost; 18% from on Facebook; 15% the internet; 12% via articles; and 12% from organizations (Funeral Consumers Alliance of Oregon, PCC Gerontology department, NW Association of Death Education & Bereavement Support). This reflects a stronger diversification of information sources; the 1st PDX Café relied more heavily on Facebook for 35% of participants.

On our Facebook page I provided my theories about why the PDX Death Cafe attracts greater numbers than most any other location. Take a look (you don't have to be a FB member to view it) and let me know your thoughts on this intriguing question!

... is Sunday, September 29th at the Eliot Center at First Unitarian Church downtown. You'll receive notice when registration is officially open. We plan a final PDX Cafe in 2013 for a weeknight in early December.

There are other Death Cafes in the works in the metro area. If you're organizing one and want me to share the details with this list and our Facebook friends, just let me know.