A write up of 14th Death Cafe at Cafe Rouge in Hampstead, London, UK 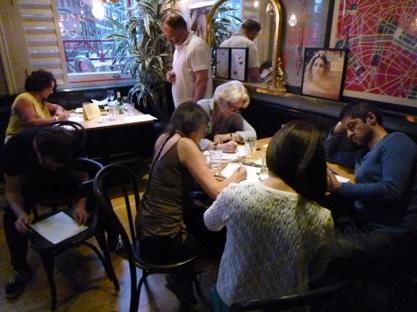 A lively evening, but less busy than expected. A demonstration in town and some difficulties on the underground may have made travelling for some people difficult. It was the anniversary of the 2 July London Bombings in 2005. I had invited two poets to read a short poem each. Only one was able to come. He read both poems to us at the start of the plenary.

The evening was in two halves: an intimate conversation around a small table for 1 ½ hours facilitated by a facilitator who also takes part in the conversation. A 25 minute break, followed by a 45 minute plenary. Ending with most people quietly filling in feedback sheets for 15 minutes. Afterwards people stayed on and chatted.

Please describe your experience of this Death Café:

It was a liberating experience, it is a great benefit that one van talk about intimate issues more easily to strangers than close friends or family. This is very important to me because I live on my own. I have problems hearing, which I think is partly due to layout of room/hard floor surface. Ex-local authority worker, female, 80.

First time attended and found the people and atmosphere welcoming and thus felt able to express myself and be listened to and to listen. It has caused a change in looking at myself as regards a recent bereavement, and an ability to explore it further from different aspects. It is a privilege to hear different people’s experiences and to share my own. Practice manager for cardiologist in private sector, female, 60.

Good. I appreciate the raw honesty everyone expresses. I have met people I like and feel they wish to explore the same issues which makes me feel less lonely in my emotions. It can be slightly off-putting when people  go to the loo during the session from downstairs. This is not a big problem and I don’t know how it could be resolved. Yoga teacher, female, 57.

Talked about health, mine and others and I’m never that keen on talking about health, but maybe it was good to have to! But still enjoyed it and always feel the atmosphere is very supportive. Art administrator, female, 62.

A lace to practice dying; a safe place. The Buddhists have practices for dying- conversation with others is my practice. Empathy and compassion, confusion and distress, calm and meditative, opening of heart. Mind can be a trickster in this space, settling in this kind open space. Dentist, female, 56.

Interesting discussion, some helpful advice about the practical aspects of dying. I am rather reserved and have some difficulty in opening up in conversation (improving I think). Clerical/computer programmer, male, 70.

Has made me think about what kind of funeral I would  want. Before I did not think I could have any control over this. I was moved by people’s personal experiences. I found X’s talking a lot, both on the small table and in large group irritating, but realised that I am being critical and this is a space of acceptance. Careers advisor, female, 57.

We talked about dying at home as against dying at hospice/hospital. Then about quality of life and what that meant personally. Finally we discussed doulas. As ever interesting and inspiring. Business analyst, male, 42.

We had a small intimate group where it was comfortable to discuss any issues. We spoke about how we wanted to die, the quality of our lives, our relationship with others and people who had near death experiences. Female.

Josefine gave gentle, honest, illuminating guidance. I felt privileged to be in my group and able to talk about death issues in a non critical, accepting, non-judgemental atmosphere. Thank you! Writer/editor, female, 69.

Helpful – wished to share experiences of my friend with whom I came before. Very helpful and worthwhile to talk to other people at our table sharing similar experiences. Magistrate, female, 63.

A very different experience! We were all older women, two of us widowed, two women very ill and struggling with energy levels every day.

I felt fine. At start it was a bit awkward as X did not realise he’d come to a Death Café. Explained the concept and what to expect. Table felt relaxed and got impression all attendees got something out of it.

I thought to have more than 3 people round the table is important.

2 x I have a life-limiting illness

6 x I have been bereaved

7 x I want to prepare for my own death

10 x I wish to learn about end of life issues

• To be able to talk about death and dying as a natural part of life’s journey both good and difficult.

• Wanted to talk about death

1 Christian in childhood/atheist since growing up

Where did you hear about this event?

1 x Through my sister who died recently

1 x Came once before

Have you attended a Death Café before? If so, how many?

4 came for the first time

2 came for the second time

3 came for the third time

1 came for the fourth time

1 came for the fifth time

1 came for the sixth time

Do you, or are you planning to host a Death Café? No

Some of the topics discussed: 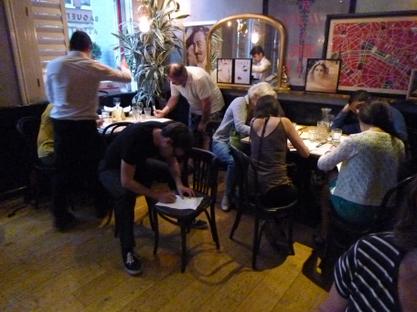 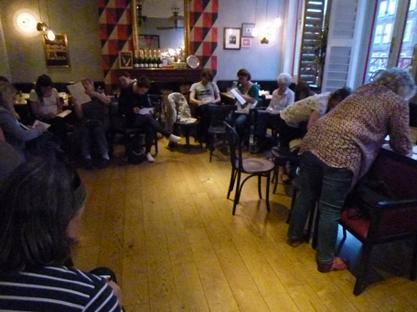 I noticed several typos and a change in the layout appearance. It is a bit messy. Sorry about that.
Typing up the feedback is always a lot of work, very time consuming. I get around it by asking a friend to read out the feedback to me, that makes the process a bit quicker. I am often late with posting write ups because the friend is not available. Organising a Death Cafe is hugely time consuming.
If this were a paid job, i could pay all my bills!