A write up of Death Cafe at Cafe Rouge, Hampstead, London, UK 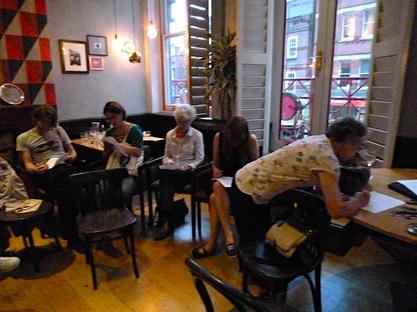 Our 13th Death Café was held on 9 June 2014 at Café Rouge in Hampstead,  We had a full house! Sharon, Philomena, Heidi, Bernie and Caroline facilitated tables with me. It was a good evening. We had two journalists attending, Conxa writes for El Mundo and Anna wrote an article for Vice magazine online. There is a link to Anna’s article at the end of this write up. Conxa’s article is not published yet. The format for the evening was as before in two parts: To begin with conversations around small tables, each with a facilitator who also takes part as a participant. And after a short break a plenary, where we sit in one large circle and everyone who wishes to is invited to speak.  We ended the evening with everyone spending time to fill in feedback sheets. Sharon and I hope to write a short paper about Death Cafe using data we are provided with. People stayed on afterwards, immersed in conversation.

For this Death Café 31 people booked: 24 attended (including two female journalists), plus 6 facilitators: one for each table. 22 feedback sheets returned (6 men, 16 women).

What motivated you to attend this Death Cafe:

I want to prepare for my own death 13

I wish to learn about end of life issues 14

-       I am studying psychotherapy and came to be able to perhaps use the experience as an essay.

How would you describe your experience of this Death Café?:

A very open and level exploration of feelings around death – your own -  and loss of others. The recognition that someone else may share what is a publically unacceptable emotion is a real comfort.  The attitudes and searching for meaning and understanding around the room is interesting to see in a world that seldom allows this conversation. TV producer, female, 59.

It was a nice and freeing experience. I had not expected so much honesty. I felt I received a lot from listening to people and being able to say how I think about certain aspects was in some ways surprising. There are a lot more things I have thought about and feel I have an opinion on than I thought. Also, being among new people who were completely open was refreshing. Production designer, female, 23.

Interesting to hear others thoughts and experiences but I do not feel that my ideas have been changed much. Not much inspiration! What about pressure from the group for assisted dying? The second half was too large a group to get real debate going or perhaps that was not what was required. Retired schoolteacher, female, 75.

The death space in which we dance is conflicted – this sense was heartfelt. To hold a myriad of positions sometimes opposing sometimes compassionate is hard to do in the death space, this is where the work lies. Acknowledgement of the conflict partly resolved partly stuck – the messiness of life and death. Calm safe space to reflect in. Thank you! Dentist, female, 56.

I came to the Death Café to write a story for a magazine, but I found the experience incredibly valuable from a personal point of view. Its great to have a forum to discuss these issues as it transpires that all issues around death come back to feelings about life. My only suggestion is that the groups mix up more so there is more opportunity to talk with other people on a smaller scale ie. Two sessions in group, then break out? Journalist, female, 26.

Stimulating. Struck by the differences in individual’s thoughts about what constitutes meaning and purpose in one’s life. Also about how the dying of a loved one, ie. how it was handled by medics etc. is so powerful years later. Everyone was very honest and candid in their thoughts and feelings. Retired nurse teacher in palliative care, female, 66.

I enjoyed this evening. Thought provoking, respectful, open, positive, questioning. I liked what we talked about and good moderator. And I can think of many more topics I would like to cover at the next session. Hope I can make it. I like the open ended structure. Medical student, female, 39.

I didn’t have any expectations apart from the fact that there would be a lot of discussion about death. I was pleasantly surprised that we spent just as much time talking about life. It was freeing to be able to talk about fears about dying and death as these topics are usually taboo. I think that as a result I will reflect more on what it means to have a good death and a meaningful life. Thank you! Civil servant, female, 41.

I learnt that others feel as I do about death and dying, others want to collaborate with and have a conscious death. How to do this I don't know. But now I feel accompanied in this search and feel confident in taking one step at the time. Actor, female, 67/68.

It was a small group of four people. We spoke about a variety of topics. What I enjoyed the most is the moment where everyone shared whether they wanted to be in the same room when someone died and if we had to commit suicide how would we do it. Altogether intriguing conversations. Manager, female.

Really interesting to meet others and hear their views on a subject that affects everyone but is rarely discussed. Could try mixing groups instead of plenary. More cake! Could try adding more structure to the plenary session. Civil servant, male, 30.

This is my second Death Café. It was very different to the last. At first this worried me because I felt the other three (people) had an agenda I am not so interested in. But I also agree with women in plenary that sometimes it will feel more attuned to you than at other times and that makes it interesting. I don't think we had a facilitator either. Arts administrator, female, 62.

I have never been able to discuss feelings etc. especially about death (in the world I come from it just was not done) so that this is still (my second visit) a new thing for me, and I wonder how it will develop. Retired computer programmer, male, 70.

As ever my mind is opened to more aspects of a huge subject and also able to find some comfort in expressing my own doubts and experiences. Social worker, female, 67.

Quite depressing! I would have enjoyed more structure around topics. I found some individual contributors to be fascinating and eye opening. Perhaps when we arrive more instructions could be useful. Writer, female, 31.

Interesting and broadened my views on many topics related to death. Journalist, female, 55.

It seems we almost talked more about life than death. I was in a fairly young group and death was discussed but more how the knowledge and acceptance helps you live a better life. IT worker, male, 42.

I found tonight inspiring and the conversation beautiful. Last time I came I think I said our conversation had turned too much to the afterlife (which I don’t believe in), tonight it didn’t and I had a more enjoyable experience. Writer, male, 28.

A comfortable and intimate shared space for talking from the heart. I feel emotionally lighter when leaving than when I arrived. Office manager/actor, female, 62.

- Some of the topics discussed at the small table;

-       - preparing for death (do not resuscitate directives)

-       - A wide variety, particularly focusing on life, the ability to say no, being mindful, appreciating the here and now.

-      -  On death – our own ideal death, importance of rituals/religion. No talk on assisted dying or funerals.

-       - Experiences of husband, parents and pet dying, the difficulties and regrets.

-       difficult death (ugly death and how to mangae afterwards)

-       briefly about what happens after death

-       being with someone who is dying in hospital

-       dying process. It can be long, Comnunication can be impossible.

-       What is a good life? Length of life. Medicalisation of prolonging life.

Experiences around the table:

• I felt the discussion was flowing nobody dominated. There was also openness and honesty. A good experience. People said they valued my facilitation. I felt not really in facilitator role. I felt integrated and integrating.

• Privileged. Lucky. Responsible. Careful. Mindful about listening. Caring. Hearing. Interested that it was very different to previous groups. They all are.

* A somewhat disparate group of 4 women  incl. journalist and one man. Some spoke a lot and others less,  one person very little. who said in their family emotions and death were not talked about. A great variety of experiences and great differences. Very interesting but perhaps the group did not quite come together as I hoped it might.

• Particularly interesting, variety of views, informed opinions and back grounds. Lot of humour and laughter.

• I found it interesting. I think the plenaries give people a good chance to hear what everyone else had talked about.

• Incredibly useful. A huge privilege to hear many views and ideas.

• My group (except for one person) did not say much during plenary. I think this was too long as we could have better used the time to continue our table conversation.

• A lively, surprising, stimulating, eloquent discussion. Not everyone speaks but that is fine. I think it is good to experience the whole group in all its diversity. I was keen not to dwell too long on the assisted suicide and Living Will topic. I aim for balance. A good discussion! It ended the evening on a high for me. But I am happy to change the format next time to mix it up a little, perhaps.

Article about our Death Café is here: 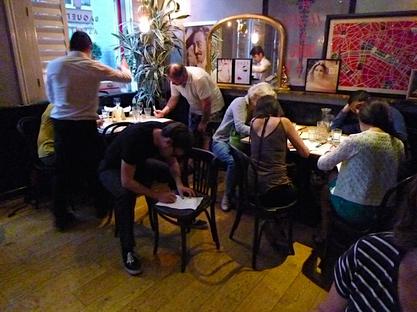 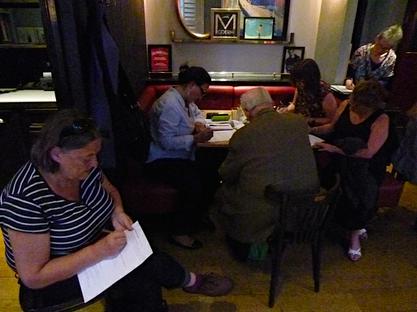 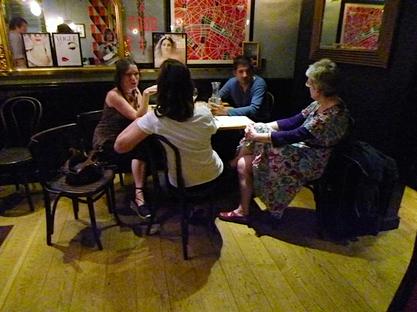 
About the photos shown

The photographs show people at the end of the evening filling in feedback forms, the content of which we have published here. I did forget to take photographs earlier in the evening.