A write up of Death Cafe - Gawler 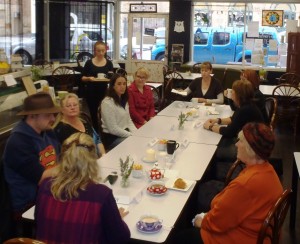 On a sunny Sunday autumnal afternoon; 12 of us experienced our first Death Café. The aptly named “Conversations Café” in Gawler, South Australia, provided the nurturing space for our group-directed conversation about Death. With warming drinks and a yummy home-made treat from Mignon within reach, we were ready to begin. As the participant-facilitator I opened the discussion with the question: “What brought you here?” The common thread amongst us all was curiosity. We had all been intrigued by the startling name, Death Café.

We were in good company. Since 2010 there have been about 9,000 other dead curious people who have attended one of the 900 Death Cafes hosted around the world. Death Cafes (Cafes Mortels) were the idea of Swiss Sociologist, Bernard Crettaz. He says his mission is to liberate death from what he calls “tyrannical secrecy”. “I am never so in tune with the truth as during one of these soirées. And I have the impression that the assembled company, for a moment, and thanks to death, is born into authenticity,” he writes in his book, Cafés Mortels: Sortir la Mort du Silence (bringing death out of silence). In 2010 Cafes Mortels were held in France; 2011 in the UK, 2012 in the USA and now have spread across the world including Australia. According  to Jon Underwood, the first UK host, the aim is to “increase awareness of death with a view to helping people make the most of their finite lives.”

Helpful hints on running a Death Café were generously given to me during a Skype chat with the dynamic ‘Doyenne of Death’, Gail Ruben in Albuquerque, USA and a phone chat with the social entrepreneur Groundswell founder, Kerrie Noonan, in the Blue Mountains, NSW, Australia. Both these inspirational women are experienced Death Café hosts. I also used the Guide provided on the official Death Café website. It’s pretty simple really; create a safe space and invite people to drink tea, eat cake and discuss death. No expectations. No topics. No selling. I set my intention that we all would feel nurtured and heard by the time we left.

In just over an hour our group of 10 women and 2 men covered many topics by sharing personal stories. All of us in the room had experienced the death of someone or something we deeply loved; whether that be the death of a grandparent, parent, child, friend, pet or relationship. Poignant memories that have shaped people’s lives surfaced such as when one of the women remembered how, as a young girl, she was removed from a funeral because she was crying. The group reflected that silent stoicism at funerals is still very much a part of our Western culture, unlike the loud wailing custom in other cultures.

One of the men remembered that he hadn’t even realised until he was a young adult that the grandparents he used to visit regularly as a child had died and that was why the family had stopped going to visit them. The kids had not been told to “protect” them. Protect them from what? We mused on how we as adults, influence our children’s worldview on death. If we are fearful of death we are likely to pass that onto our kids.  One of the women shared that her young kids were starting to ask about death and she was keen to learn positive ways to engage her kids around this subject.

We spoke about our experiences of viewing dead bodies. Some of us were open to do that; others were not. One women shared how surprised she was that people had commented how beautiful her Mother had looked at the viewing of her body yet her Mum had never been described as beautiful when she was alive. We pondered the practice of Funeral Directors to “make-up” the face of the dead person and how sometimes they get it so very wrong and it becomes a grotesque final memory. Why do the faces on dead bodies need to be made-up to look like they were when alive? Why are we so removed and repulsed from what a dead body looks like?

We observed how we use the word “lose” when someone dies. “I lost my son 2 years ago.” Sounds like a Mother losing her child in the Supermarket and frantically waiting for the broadcasted message advising a child has been found, please go to the front desk. That message will not come. I didn’t ‘lose’ my son. He died in a car accident.

As the trust within the group developed some of us felt safe to share our more personal out-of-the-ordinary stories around the topics of being psychic, after death communications (ADCs), past lives, near death experiences (NDEs). One person shared how she saw a woman walk through her dining room towards her bedroom. After a phone call to her Mum she knew it was an Aunty who had died. Seeing and talking to dead people is not a regular event for this person yet is for a couple of others round our table. Another person shared how she medically died on the operating table but was aware of the experience the whole time; an out of body experience. Another story was about an Uncle who sat bolt upright in bed moments before he died and was animatedly talking with someone that the people in the room could not see. Having had my own ADCs with my son, it was a comforting space to hear others stories around these events that we do not often talk about for fear of being ridiculed. This is the magic of Death Cafe.

We closed the session with completing an evaluation form. The feedback was that it was an open, interesting, informative and enjoyable time. One of the questions asked: If someone told you they were thinking of attending a death café what would you tell them? T

Wonderful write up! Welcome to the community of Death Café hosts.