A write up of Death Cafe In Oxford 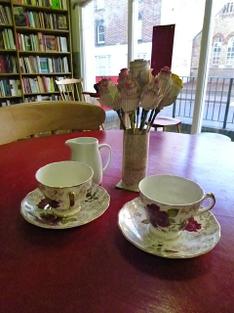 We had a very enjoyable Death Cafe gathering at Dennis's Albion Beatnik Bookstore. A big Thank You to Dennis for hosting us! Sitting around small coffee tables in the shop window, surrounded by books piled high. A really beautiful little place. Reminding of Harry Potter or days gone by. A really intimate and delightful venue for this Death Café.

A small group of eight people attended. Not all who booked were able to come and others joined us without booking, so it worked out really well in the end. It was a diverse and friendly group of people ranging from aged 20's - 76!

This Death Café happened to take place during Dying Matters Awareness Week and several Death Cafes were held in Oxford and in the area during that week! It is wonderful to see how Death Cafes are springing up everywhere. One of the members of our group held a Death Café later in the week with the OxBel (www.oxbel.org.uk) a befriending service for people with life-threatening illnesses, a charity I helped set up with Diana Senior in the 1990’s.

Our little group had a nearly even number of men and women, which is an achievement. There seems to be much more willingness nowadays for men to speak about personal experiences, thoughts and belief around dying. In the 1990s relatively few men would join a conversation about death. After the general welcome and introduction I asked that we all introduce ourselves, saying a little about ourselves and why we were interested to come to the Death Café. People wanted to stay in the whole group and not speak in pairs. So we had a large circle of introductions and from there a conversation developed when people spoke in more depth about their concerns.

One topic was the difficulty of having a conversation about death within the family, where people held different attitudes and showed no interest in discussing their views or saying more about why they thought the way they did. Everyone in the group was eager to address the subject. Another topic was funerals and people’s views of these and their different experiences and ideas. The issue of suicide was brought up and how to be present with someone who is suicidal.

The evening was over far too quickly.  As always there was a feeling of warmth, humour and openness amongst the group. Strangers had come together and shared some intimate and moving stories with each other.

Dennis, the bookstore owner was a gentle presence in the background and supplied us with delicious tea and cake. He is kindly offering to have us back for another Death Café in the future. I am keen!

Here is some of the feedback:

I really enjoyed the evening and thought you handled it so well, giving everyone time and honesty. Thanks for allowing me just to be there. I needed it then. 69, female, retired from working with, gypsies & travellers in Oxfordshire.