A write up of Albuquerque Death Cafe 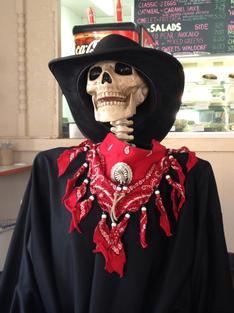 On Saturday, February 2, 18 people came to share their thoughts on mortality to get the most out of this [finite] lifetime at the latest Albuquerque Death Cafe. The eight men and ten women all had their individual reasons for attending the free event at Sheila’s Sweets, and the conversation was fascinating, as always.

Lola the plastic skeleton presided at the head of the table, wearing a cowboy outfit. Remember, “whatever Lola wants, Lola gets.” Death is a lot like that.

The conversation started with the topic of New Mexico’s new status as a state that allows physician aid-in-dying, joining Oregon, Washington, Vermont and Montana. Talk of helium deaths, ceasing to eat and drink, and visiting Switzerland or France for aid-in-dying followed.

One theme came out clearly, quoting the refrain from a song that goes, “Live like you’re dying.” With the option of having aid-in-dying, those who face terminal illnesses can focus on living as fully as possible with the time they have left, rather than worrying about suffering and dying. One sentiment that came out strongly from a number in attendance was the desire to have control over one’s own demise.

The conversation shifted to a lengthy exploration of Near-Death Experiences (NDEs) by two people in attendance. Everyone listened intently to their detailed stories of NDEs they experienced. After one gentleman told his story, he said he considered himself a man of science, and yet, “There’s more to us than what we see.”

Others mentioned the practice of honoring one’s ancestors enables us to help connect with a family constellation that helps work out issues over the generations.

A woman expressed the sentiment that there is no afterlife and she wanted to talk about a cremation rip-off. This prompted a discussion of the lowest-cost cremation providers in Albuquerque.

Another theme: we’re not so much afraid of death as much as declining health and mental ability. Often, Alzheimer’s disease is harder on family members than the patient who may not have a clue what’s going on. Someone mentioned the idea of AARP fostering the building of communities that recognize declining mental function in neighbors and help provide support.

Is Alzheimer’s a result of exposure to heavy metal toxins such as mercury, aluminum and lead in everyday items? It’s a good question.

Another source of cognitive decline is general anesthesia for surgery. A nurse in the discussion said that it can take three to six months to recover long and short term memory after an operation. She recommended having an advocate when you’re in the hospital, get well hydrated, have some mental stimulation and get out of the hospital as soon as possible.

The general culture of avoiding talking about death was also discussed, bringing up Japanese funeral traditions depicted in the film Departures and the Irish tradition of having “sin eaters.”

Look for the next Albuquerque Death Cafe on March 15 at 2:30 p.m. at Sheila’s Sweets. Join the local Meetup Group to keep informed!