Want to Live a Fuller Life? Then We Need to Start Talking About Death

A write up of Death Cafe - Toronto West EDT 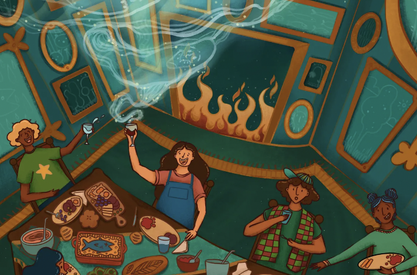 Article in the Globe and Mail Newsletter on October 28, 2022. Written by Gayle MacDonald.

On a Monday night in early October, a group of about 30 people sat under heat lamps on the back patio of the Bluebird Bar in Toronto’s west end, sipping wine and beer, and chatting about death.

Not necessarily their own mortality – although a few admitted they had come to their first Death Cafe because the thought of their own inevitable demise freaks them out – but to chat about death in a big-picture kind of way and to address some of their hang-ups around it.

Miranda Too, a PhD student at York University, shared that she was there, with her boyfriend, to try to figure out why – after losing a couple of people close to her in the past two years – she has not been able to cry. “Why do I have this willful blindness about death?” she asked the assembled group of strangers. “Why do I put it in a box at the back of my mind?”

Hesame Fetahi, a 28-year-old human-rights activist who recently moved to Canada from Tajikistan, where he has seen many friends and family killed, said he came because he feels numb to death. “How do I live meaningfully, knowing death is coming?” he asked. A family doctor, Julie McIntyre, seated next to him, put a hand on his arm and shared that she had joined this soiree because she wanted to gain insight into how people feel about death so she could better counsel patients facing the end of their lives.

As final introductions were made, one thing became clear. This eclectic group – largely professionals aged mid-20 to late 60 from all walks of life, were here because they find death both daunting and fascinating. To them, death is scary, sure, but not so scary that they can’t talk, laugh or even joke about it.

As Death Café host Linda Hochstetler puts it: “The people who come to these evenings are tired of death being such a taboo topic. They come to talk about death in a candid and thoughtful way so that when it comes for them, or their loved ones, they are better prepared.”

Death cafés and death dinners are not new. Indeed, Hochstetler, a social worker and Buddhist lay chaplain who has a private practice that specializes in illness, death and dying, has been offering them in Toronto for seven years. (She has played host to up to 30).

What is new, however, is the slow but growing acceptance that more of these death conversations need to take place. As McIntyre noted, “Queen Elizabeth showed us how to die. She planned her whole funeral from start to finish. Clearly, her own death was something she’d been thinking about for a long, long time.”

The seeds of the “death positivity” movement – yes, there is such a thing – started in the early seventies, around the time Elisabeth Kubler-Ross published On Death and Dying: What the Dying Have to Teach Doctors, Nurses, Clergy and Their Own Families, and Ernest Becker published the Pulitzer Prize-winning book The Denial of Death (1973), which argues human behaviour is motivated by our fear of death.

These groundbreaking books got the general population talking about death and helped to normalize it, somewhat. Then, in 2011, a Brit named Jon Underwood took the death conversation to a whole new level when he played host to the first Death Café. His theory that organizing safe places for people to talk about death might help them accept it, plan for it and hopefully live the time they have left, whether it be a few months or a few decades, as joyfully as possible. Underwood set guidelines that the gatherings be held in neutral places without any religious or group affiliations (hence a bar) and no agenda other than a free exchange of ideas about death.

The model has grown, and, as of today, according to deathcafe.com, there are 15,000 death cafés in 82 countries.

In 2013, Michael Hebb and Scott Macklin took death positivity to another level when they started teaching a University of Washington graduate course called Let’s Have Dinner and Talk About Death. On the deathoverdinner.orgwebsite, Hebb explains the genesis for the idea came after he realized that 75 per cent of Americans want to die at home, yet only 25 per cent of them do. “When we learned that how we end our lives is the most important and costly conversation America is not having,” he writes, they started inviting people to supper.

Since then, there have been more than 100,000 death dinners around the globe, including right here in Canada. Rita Giancola, a 55-year-old part-time York University student, has held a dozen death dinners in the past year, inviting colleagues, family, friends and complete strangers.

Why has she been on something of a death-dinner roll? She is using the research from those evenings to write a paper on death and dying for her master’s degree in Interdisciplinary Studies. But she is also holding them because she believes strongly that popularizing death through social settings can help make it less scary.

“In my culture” – she is of Italian descent – “we just don’t talk about it. I lost my mother to cancer when she was far too young and I didn’t have a clue what she wanted. I don’t think it’s healthy that we walk around with blinders on about death. It wasn’t good for me and I don’t think it’s good for society.”

Giancola’s death dinners work something like this: She invites people for a meal (she makes a mean risotto), gets everyone settled and then she leads the discussion by asking questions such as: If you knew this was going to be your last dinner, what would you want to eat? If you could design your own funeral, what would it be? If your health worsens, would you want to be in a health care facility? What do you want for your epitaph?

Not your typical dinner conversation, to be sure, but the kind of heavy-duty stuff that all of us should contemplate – before it’s too late. “Now, when we are healthy, this is the time we should be having these conversations, not after when we’re sick, too old or too tired to make these decisions,” says Giancola, a high-school drama teacher who hopes to use her research to write a musical about death. “Dear Evan Hansen helped take some of the stigma out of talking about mental health and perhaps my musical can do the same for death and dying.”

Three years ago, the concept of “dying well” emerged as one of the trends of the year at the Global Wellness Summit, and experts considered “exploring death and working on one’s fear of it” an element of living a healthy life.

Hochstetler, who has been trying to get that message across to Canadians for the past 10 years, believes the death positivity movement has finally turned a corner and is making its way into the mainstream. The pandemic, she adds, has inadvertently speeded the process along.

“Sadly, the virus forced everyone in the world to confront the possibility of death in a more realistic way. Before COVID, people could keep death neatly packaged away in the back of their minds. The pandemic brought death front-and-centre. Death became more real – to more people – and conversations around death picked up.”

“During COVID, I hosted death cafes by Zoom and we had people from all over Canada and the United States,” says Hochstetler. “The global pandemic seemed to be a wake-up call to many people who decided it was finally time to stare down their death fears.”

That momentum has carried through to the first in-person death café Hochstetler has hosted in almost three years. The event in early October at Bluebird Bar was her best-attended to date.

“Hundreds of years ago, death was real,” says Hochstetler, who also wrote the book 21 Days to Die: The Canadian Guide to End-of-Life. “We cleaned bodies in our kitchens and laid them out for final viewing in our living rooms. We wouldn’t have been very old before being asked to care for a dying family member or seeing a dead body up close. Death was normal and it was all around us.”

Death cafés, she explains, are just one way for society to keep normalizing the process. “Death cafés are kind of a beautiful rehearsal for coming closer to death and understanding it and grappling with it so when it happens to someone we love – or we are confronted with it ourselves, which is inevitable – we are better able to support each other.”

McIntyre, the retired family physician, agrees death cafés are a safe, neutral meeting place where people can dip into some part of their psyche they are often afraid to delve into alone. “People come to these evenings thinking there will be crying and sadness and fear. In my experience, they are the exact opposite.

“They are enlightening, stimulating and deeply engaging evenings where people can relax and talk about issues they can’t often share anywhere else,” says McIntyre, who has attended 10 of Hochstetler’s death cafés (for her own personal growth but also to gather intel so she can better assist people in her new role as an end-of-life counsellor and advocate).

“If we don’t understand something, we fear it, like viruses and vaccines,” says McIntyre. “I come to death cafes because I believe the more we understand about death the less we’ll fear it. They help people see how precious life is … because if you realize that life is temporary and we’re only here for a relatively short period of time, life takes on a new value. It makes us value living – and the time we have here – that much more.”