So much demand for the space to talk about death

A write up of Faversham Death Cafe 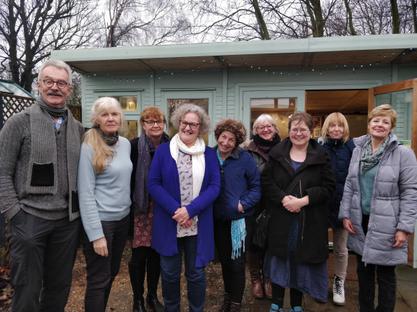 Frustratingly, we actually had to turn people away at our February Death Cafe as we just didn't have the space.  We are so fortunate to have the use of a cosy log cabin in a beautiful walled community garden in Faversham. However, it only holds around 15 people and we had nearly 20 people wanting to come to the Death Cafe (we've the option of a larger space at the Garden for our March Death Cafe).
Despite wariness from some people when putting posters up (that the events would be macabre or depressing), feedback from people who attended has been quite the contrary.  Although there has been some sadness and anxiety shared, people have overwhelmingly fed back that they have found attending the death cafes to be "inspiring", "comforting", "liberating", "uplifting" and "life affirming".  Every single person who has been has said they would recommend to others that they go along.    Some of the feedback from people:
"I found it stimulating and a safe environment to share issues and thoughts"
"Allowed me to come to terms with the inevitability of my own death and challenge my fears in a logical way by sharing"
"Good to hear other people's experiences around death... I think if I was to attend another Death Cafe I would be able to find my voice and express deeply buried feelings"
"Has moved personal events forward.  I can talk about them now."