A write up of The 4th PDX Death Cafe 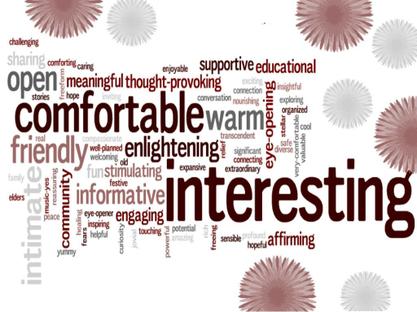 at the Peace House

Context: This event was held on a Thursday evening on one of the coldest days of the year. Our first location in a residential setting, we were hosted by The 18th Ave Peace House in Portland. This was our first "walk in" event that did not require prior registration. This was also our first event that featured music (live bluegrass, with songs selected for their relevance to the topic of death), though this feature was not announced beforehand. The large house was warm and thoroughly decorated for the holidays, and was divided into 10 different tables or sitting areas, with a facilitator at each one. The Peace House provided lots of wonderful snacks and treats, coffee and tea.

Format: Rather than assigning specific topics to the different tables, as we have done at a few of our past events, we used a more free-form format for this one. Each table was given a list of 10 conversation starters/prompts but were free to use them (or not use them) as they wished. Half way through the night, we had a 10-minute break. People were not asked to change tables at that time but were allowed to do so if they wanted to.

Who Showed Up: This event had a turn-out of around 70 people, including our 12 co-hosts/facilitators (Kate, Holly, Angela, Megan, Phil, Don, Nancy, Coleen, Lee, Melissa, Kevin and Shemaya).

Of our 70 (+/-) people in attendance (including facilitators), 41 turned in completed evaluation forms at the end of the night. The following is some of the data reported.

Out of the 41 participants surveyed, 38 either "Agreed" or "Strongly Agreed" that they would recommend Death Cafe to friends and family, and 38 similarly said they would consider attending a future Death Cafe event.

All of those surveyed reported that the event had a positive impact on them.

While it's fun, of course, to notice the positive feedback (which did overwhelmingly dominate the evaluation responses), it's also important to us that we consider the critical feedback we get as well. And indeed, we have always placed a great deal of importance on our evaluations, taking them seriously, learning from the critiques and always looking for ways to improve PDX Death Cafe events.

In the feedback for this event, there wasn't any critique that was mentioned frequently enough to cause much concern or warrant any necessary changes to future events. The most common criticism (and possibly the only one mentioned more than once or twice) was the structure of the event (or lack there of). For example, some people reported a preference for the assigned topics for each table (as we've tried in the past). However, reports of appreciation for things like looser structure and free-form facilitation outnumbered the criticisms. This is probably a matter of personal taste, but perhaps something for us to remember as we move forward, maybe finding a balance between the two.

So while there weren't any other frequent complaints, there were a few things mentioned that I figured I'd share here, most of them just as food for thought:

Interestingly, this person reported this as both a most enjoyable and a least enjoyable aspect of the event for them. While it was just one comment, I personally choose to see it as a reminder that as PDX Death Cafes become more frequent and possibly begin to develop "regulars," it wouldn't hurt to be mindful of newcomers and the possibility that they could feel like an outsider. That would be an unfortunate twist on the Death Cafe experience.

"I was hoping for a little deeper discussion"

This is also likely to become a more common complaint, as Death Cafe veterans return again and again, and - as many of us have talked about - there's only so deep you can go in the Death Cafe model's discussion. Which is not to say that Death Cafe discussions cannot be, or aren't often, very deep and profound. But the desire to go deeper is something we should expect to see more of. And personally, I think that's great!

This comment, especially since it's the only one, is not a shocking remark, nor does it demand any particular choice of format at future events. A number of people do seem to appreciate the freedom to move to a different table. And another bunch of people find it disorienting or disruptive. Moving forward, we should continue to keep both of these schools of thought in mind, and maybe try to maintain a balance. One thought I had was that we could have half our tables as sort of "fluid" seating, where people are welcome and encouraged to mix it up at the break. But then maybe have another half of our tables designated as stationary, allowing people who are sensitive to that to feel more settled and able to spend a little more time together and on their conversation topic. Just a thought.

"confused when I first walked in, but it was quickly remedied"

Since I personally was sort of designated greeter at this event, this comment naturally stood out to me. And thinking back to all that was going on around the entryway, in hindsight, I can understand feeling confused upon entry. Maybe this is just a reminder to always welcome people by checking in with them, helping them get oriented. Also, maybe we could try having less going on right by theentrance, if possible.

And a few suggestions...

So we do have some constructive criticism to work with from the evaluations. But it's worth repeating that the feedback we received was overwhelmingly positive. The thanks and praises were far too abundant to list here. So in closing, here are some comments left on evaluations that really are more representative of the whole collection...

"The atmosphere immediately put me at ease and made me feel warm."

"Amazed that this is possible!"

"Left me hungry for more."

"Peachy keen, not too shabby."

"People were so kind and caring."

"I absolutely enjoyed my time tonight and am so grateful for the opportunity to meet others that are interested in bringing the topic of death and dying out in the open. I felt very comfortable and supported all night."

Many thanks to all who participated in this event, with special thanks to The Peace House, our wonderful band, and all our facilitators!

Hi. Have you ever facilitated a Death Cafe for a church? I imagine my congregation (in Wilsonville, OR) might be interested. And that while we might publicize it, it would be mostly attended by parishioners. Would you (and a group of experienced facilitators) come to Wilsonville to help us offer a Death Cafe?

How do I get on some kind of notification list for the next Death Cafe in Portland OR?