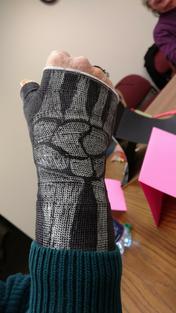 We met at the Urbana Free Library in Urbana, IL. There were five in attendance. I found out after scheduling that a fair number of people who might have come were at a local church watching "How to Die in Oregon" and couldn't be in two places at one time.

Cupcakes and donuts were served. People brought their own beverages.

Participants discussed having come to many of the other death cafes and how much they valued attending and talking.

One of our attendees is a forensic archeologist who told us about a book she really enjoyed reading. She said "Spook" is a book about the afterlife. People discussed their thoughts about the possibilities of what comes after death.

One woman shared that she had seen a spirit leave the body of a loved one at the time of death and described it as like a mist floating away. Another said he was with a friend who was having her cat euthanized and says he saw the shadow body of the cat, the spirit, rise into the air and vanish. A third person said she had seen and talked to an otherworldly being/spirit but was not sure it was a ghost of the undead.

No evals were requested by myself or my co-faciliator. We had blank papers for anyone who might wish to leave a comment of any sort. No comments were received.

Everyone was comfortable with  photos being taken. I took only one but it's cool. One attendee was wearing a special wrist cast. It's pictured here.