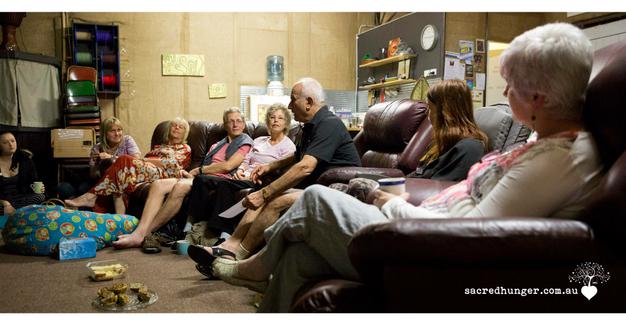 She started running Death Cafe's on the Central Coast in June 2013, and continues to run regular well attended events.

We no longer run Death Cafe in actual cafe's due to challenges relating to noise, us taking up too much cafe space, and participants indicating that they require "out of hours" Death Cafe's. We instead use a local likeminded venue who have super reasonable hire rates!

The style of each Death Cafe varies slightly according to the needs of the group on the night, but all adhere to the Death Cafe guidelines.

Sometimes people's questions about death are written onto a paper and all thrown into a pot, with topics being randomly selected for discussion. At other times, when particpant numbers are small, we sometimes divide the available time by the number of people in attendance, and we get to talk about whatever we want to for the alloted time. Some people request that a conversation ensues, whilst others just want to talk and be listened to.

We have a very active 'deathie' community on the Coast and each event sees familiar faces as well as new faces too.

I hope you can join us sometime.

Gypsy Artemis (previously known as Kim Ryder) is a Central Coast based death educator and doula for the dying, interested in expanding community consciousness around death and dying.