Can Death Be Funny?

You can read more it here >> 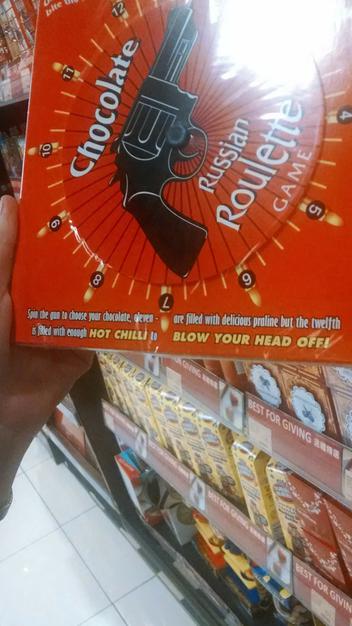 My favorite place to buy souvenirs is the grocery store. It is relatively inexpensive to buy a large number of gift items.

The other day Megan and I came across a Russian Roulette chocolate "game" here in Hong Kong. There are 12 chocolates in the box: 11 are tasty, and one has hot chili peppers and will "blow your head off." Immediately I laughed. Then I started thinking about how I could buy chocolate without it melting. (No chance). Then I remembered a recent Law and Order episode where the main character Olivia Benson is tortured via Russian Roulette.  It was an emotional, suspenseful scene. THEN I asked myself...is this chocolate funny?  Can death be funny?

Obviously humor is personal. Most humor is content that we can relate with. If you told me jokes about getting lost in Hong Kong, you would have me gasping for air from laughing.

Death humor is different though.  Is it funny if we can relate?  I have not had any personal experiences or losses with Russian roulette, so perhaps it was funny.  But then I think about gun violence in the US and the tragedies that seem to be happening daily and I think of the suicide via gun of an older relative in my family.  Then I feel slightly ashamed that my instant reaction to the chocolate was so gleeful.

This is definitely something I will continue to contemplate. I might ask you, dear readers, what you find funny and where your line is.

Comedy writing cliche is pain+time=comedy. I remember after the shuttle disater in the 1980s...there were jokes circulated among my childhood crowd. In hindsight I think they were awful, but I didn't know any better then.

Society's sense of humor as it relates to death will be tested by the popularity of the new movie release "Ten Thousand Ways to Die in the West." I have not seen it yet, save for the previews where someone dies by fart. Hopefully no one reading can relate to that one...

(Thanks to Megan Mooney for being so diligent with picture taking...these are all hers.) 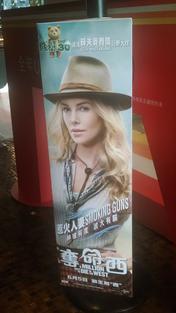 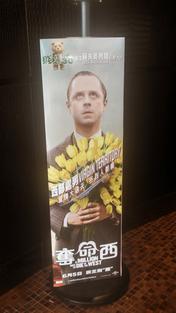 I've heard it said that we laugh at that which we don't understand. I think death falls in that category. For those of us who have lived long enough to experience death of people close to us it is not so funny. Although I do enjoy humor, laughing and good jokes, we don't laugh at the experience of death so much as the memories of those we love that make us laugh. Thank you for the insight from Hong Kong.

"I'm the guy who laughs at a funeral." From the band the Barenaked Ladies.
Death and it's circumstances can be funny.

I believe Bill Cosby lost a son. Can't imagine he or any others would integrate such an event into a comedic delivery. Personally, I never "got" the dead baby jokes that circulated years ago--totally inappropriate on every level.

George Bernard Shaw said, "Life does not cease to be funny when people die any more than it ceases to be serious when people laugh."
Humor is appropriate, even in the face of death, when it's genuine, sensitive, and comes from the heart. As Allen Klein, author of The Courage to Laugh states, "Humor helps people cope; it empowers them and it is defiant, triumphant and life-affirming; it provides perspective and balance; and it diverts people's attention, gives them comic relief, and liberates them from their loss."
taken from www.efuneral.com

My own thoughts written last year on death jokes....

In the craziness of my grief I have become obsessed with celebrities who have also lost children, perhaps in an effort to feel that I am not a freak. Well what an eclectic bunch they are, and therefore it's not exactly reassuring me of my normality:
John Travolta (16, seizure)
Eric Clapton (4, fell out window)
Mike Tyson (4, accidental strangling by cord)
Dr Dre (20, drug overdose)
Marie Osmond (18, suicide)
OJ Simpson (18 months, drowned)
Anna Nicole Smith (20, drug overdose)
Mia Farrow (19, heart failure)

But what about comedians who have lost children?? Well Carol Burnett is one. She lost her daughter at the age of 38 from lung and brain cancer, and then went on to write a book and stage show about their relationship. Was it funny? I don't know.

I can't find any other well known comedians who have lost children. Does that mean that they quit their jobs as soon as it happens? How could they possibly stand up on stage and continue to tell jokes if the greatest love of their life has tragically gone? I did find one story about a comedian who asked his audience who amongst them had kids, and then randomly happened to pick a couple. They were confused in their joint answer of how many kids they had, and it turned out they had just lost a child. An awkward silence fell on the audience and the comedian changed the subject. Yes - there are no funny jokes about the death of a child. It's the last taboo.

Here are some interesting sites I found on comedy and parental bereavement:

On http://www.kobymandell.org/story/13464336/comedy-for-koby there is a comedy night that raises money for victims of terror in Israel.
An actor has written a one man play about losing his son http://www.broadwayworld.com/off-broadway/article/Chris-Clavellis-Comedy-About-Parental-Loss-Premieres-June-6-20130430#

Other than that there are plenty of jokes about death in general (death bed, funerals etc).....but they seem to never mention the death of a child, I guess because there is nothing funny about it.

i agree and disagree

Stage Four breast cancer woman here…google what that is if you don't know, or visit METAvivor.org Yes, I think death can be funny. I am dealing with my prognosis with humor, what I call "cheerful despair" and I am here to tell you there is a BIG difference between grieving the death of a loved one and grieving your own death--specfically, when you've been given a designated "shelf-life" expiration date as I have (which may or not occur--so no pinky-pinky, happy hope-y dopey comments, please.) So please, nobody tell me what to think how to feel, how to act, what's appropriate about MY experiences to MY life and MY death. And if you can't handle what I write about MY life and MY impending death, then don't respond to me. I OTHO, will respect what YOU write about YOUR grieving issues. Because they are yours, not mine. Boundaries, boys and girls, BOUNDARIES! I once wrote on a popular six word writing site "There are worse things than cancer" and endured so much hatred, vitriol, ignorance, petty fury from those who have no idea that I am actually dealing with the bloody disease, only because they could not control their grief over losing a loved one to the disease. So naturally, I was silenced by those who are having an entirely different experience--griefing a loved one, not consciously experiencing their own slow dying by disease--worthy, but NOT what I was writing about. Death is funny,for the most part, except for the death of a child, I have found. No parent should outlive a child. Ever. It is not natural law. It is a horror even beyond our own impending death, I understand from those who have lost children (like my mother.) See? I can allow that another's experience exists along with mine, even though IT'S NOT MINE. I imagine that Broadway play will be a big help to those grieving the loss of a child, another taboo subject in our perky, happy no-suffer US culture.

Death is dark comedy its not for the timid

My father died 5 weeks ago. He and I were very close and I miss him. He always loved a good joke and dark humor. I went looking for Dead Dad Jokes but couldnt find anything. My Dad wanted people to remember him in a happy way. Positive.
My friends and I laughed and smiled at his memorial service, taking group photos and shared funny stories from the past. I sobbed that night and many more heavy with my grief. But my Dad would want me to cope, live, love, LAUGH and be happy, so I am. My brother proceeded to get very drunk and hasnt climbed out of the bottle since. He's suffering from serious depression now and I want to help him. I thought of maybe sharing a stupid death joke with him so that maybe he can lighten his heart a little but Im worried it will not be recieved how I intend so I havnt... people coping with the inevitable death that will eventually come for us all is so complex! Losing my Dad sucks to say the least but every time i find a way to chuckle I feel my Dad chuckling along with me.

Personally, I lost my mother to cancer 2 years ago, and some people use death humor as a coping method to deal with deep grief, by somehow manipulating it to something funny and easily acceptable in our minds.
I've recently saw a stupid advert for mothers day to win jewellery 'complete this sentace: My mum, she is...' and my instant reaction was 'Dead' but rather of being upset, it felt funny . :) Dark humor.