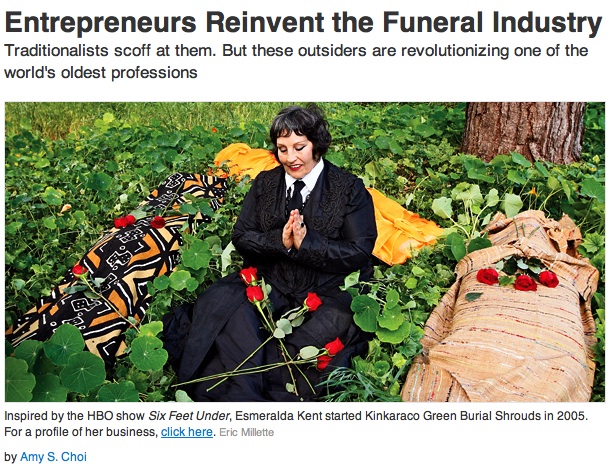 These trailblazers come from all sorts of businesses - automotive, design, technology - unburdened by the conventions of their new industry. They introduce products some consider shocking. Traditionalists scoff at them. But these outsiders are revolutionizing one of the world's oldest professions: the funeral industry.

It's a good time to deal in death. The first baby boomers are entering their mid-60s, and the death rate in the U.S. is expected to rise from 8.1 people per thousand in 2006 to 9.3 in 2020, according to the National Center for Health Statistics. Yet the traditional funeral industry is hardly healthy: The Federated Funeral Directors of America, an accounting firm for independently owned funeral homes, found that in the past 20 years, its clients' profit margins have been cut nearly in half. Some 44% of funeral home directors, up from 28% in 2006, blame the increasing popularity of cremations and alternative burials for sinking profits, according to consulting firm Citrin Cooperman. Some funeral homes have responded by offering themed funerals, such as backyard barbecues, while others diversify by hosting weddings and other events.

Yet the $11 billion industry has been slow to change, with multi-generational family and private companies commanding 89% of the business. A few major vertical corporations, which control everything from choice in caskets to burial services, and often provide products to small mom-and-pops, make up the rest.

Enter the entrepreneurs. Clint Mytych, founder and CEO of Eternal Image was running a luxury car rental company in 2002 when it dawned on him that he'd like a car-themed funeral, and a casket shaped like a 1967 Ford Mustang . But not only could Mytych not find his Mustang casket, he didn't find anything that he thought had any personality at all. "I mean, nobody says, I am so excited about the Batesville #22 casket' because it's made of their favorite wood," says Mytych. He saw an opportunity in idiosyncratic funeral products that would reflect the customer's personal taste. In 2006 his Farmington Hills (Mich.)-based company introduced the country's first licensed urn—a twisted bronze spire topped with a cross, licensed from the Vatican Library Collection. Mytych has since signed licensing agreements with the American Kennel Club, Major League Baseball, more than a dozen universities, and most recently, CBS Corp., for the rights to the Star Trek brand. His urns cost about $800, compared with $3,000 for a traditional marble one.