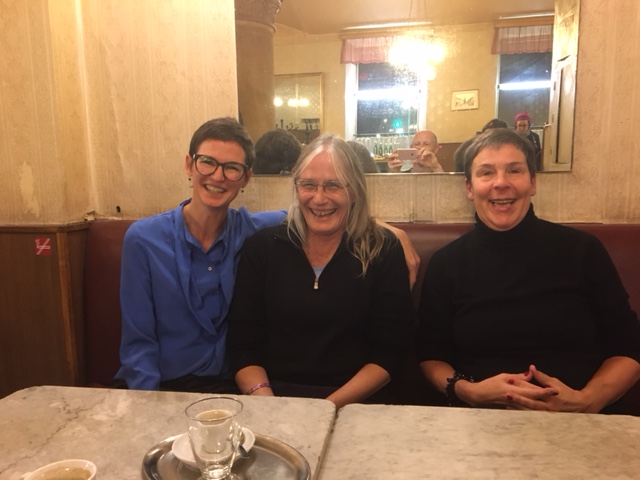 Death Cafe came relatively early to Austria. Jella Jost’s motivation for initiating the first Death Cafe in Vienna, however, had less to do with Vienna’s reputation for being a rather morbid city, but more with her personal experience with her mother’s death. When she came across Jon Underwood’s description of Death Cafe, it seemed to be just what she was looking for, but since there was no Death Cafe nearby yet, she started the 1st Wiener Death Cafe together with Aurelia Burckhardt in 2013.

The next Death Cafe in Austria was the Linz Death Cafe – “Mit dem Tod bei Kaffee und Kuchen”, which I initiated in November 2015 and which has been held every month since then. More recently, Alexandra Kleinheinz has initiated a third Death Cafe in Austria, the second in Vienna. When this Death Cafe Vienna was held last Friday, 10 November, Jella and I were both very happy to be able to attend. It was the first time that Jella, Alexandra, and I, three Death Cafe facilitators in Austria, were able to meet in person, but it will certainly not be the last.

As wonderful, inspiring, motivating as each and every Death Cafe is itself, it was very helpful to be able to sit down together afterward and exchange experiences among ourselves as Death Cafe facilitators. We talked about our personal motivations, about what facilitating a Death Cafe means to each of us, about difficult situations that occasionally arise, practicalities like location, announcements, coordinating dates, and how we might be able to support one another – all this despite the limited amount of time we had together.

It seems the greatest advantage we have in Linz is our venue, the Kepler Salon. Although Death Cafe is quite different from other Kepler Salon events, we have the full support of the staff and community members. First of all, we have a beautiful, comfortable, large room in the center of town, in the old building where Johannes Kepler once lived. Although the venue is open to the public, nothing else happens in this space during Death Cafe. No charge for admission is one of the central principles of Kepler Salon, which also applies to Death Cafe. Chairs, tables, coffee machine, dishes are all available for us to use. The Death Cafe dates are published and promoted through the Kepler Salon newsletter, the printed program and the website, which means that the dates are automatically included in the events calendars of local newspapers. Kepler Salon also creates a Facebook event every month, so all I have to do is add lists of people to be invited via Facebook. This means that news of the Linz Death Cafe reaches a very broad audience, which is reflected in the tremendous diversity of the participants.

Jella has had experience with holding a Death Cafe in a private residence as well as in coffee houses, while Alexandra started in a coffee house to begin with. Although there is no scarcity of suitable coffee houses in Vienna, having little to no control over what else is happening at the same time in the same space can be a disadvantage. Promoting a Death Cafe is another time- and energy-consuming job, which is harder to do as a private individual. I have nothing but the greatest admiration for Jella and Alexandra, who do all of that themselves, while I am really quite spoiled by Kepler Salon.

One of the points we discussed on Friday is the need for a suitable venue for Death Cafe in Vienna, something more like Kepler Salon or at least a separate area in a coffee house, but spaces with no political or religious affiliation are not necessarily easily accessible for this kind of use. Nevertheless, the three of us agreed to all keep looking.

Since Jella and I realized too late that we had both set the date for a Death Cafe on Sunday, 19 November, we also agreed that in the future we want to coordinate the dates better. We would like to see more exchange among the different Death Cafes, and since it only takes 90 minutes to travel between Vienna and Linz by train, that shouldn’t be too difficult. To strengthen our Death Cafe network in Austria, we also agreed to consolidate our social media channels in an effort to reach more people and further discussions in general.

In keeping with the spirit of Death Cafe, this first meeting among Austrian facilitators was marked by a strong sense of mutual respect, support and encouragement, and I found it just as inspiring as each experience of Death Cafe is. It was certainly well worth the effort of taking a train to Vienna Friday afternoon, and I look forward to future meetings and a strengthening of this important network.