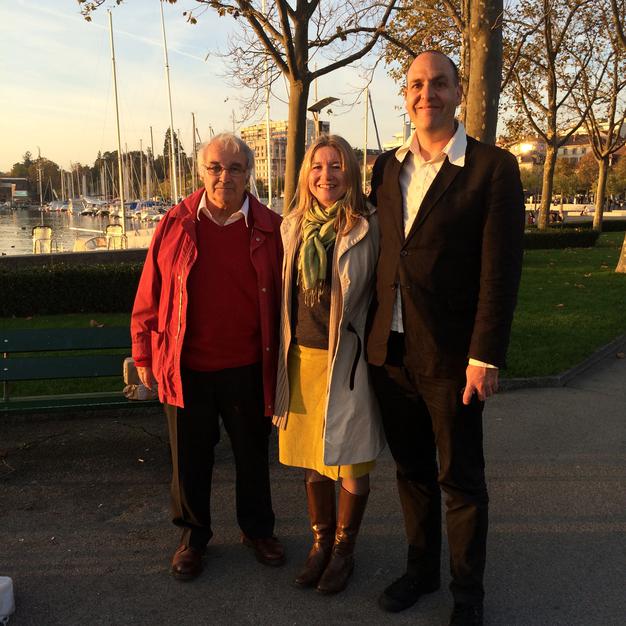 It is now over a week since I went to Switzerland to meet Bernard Crettaz. It was a brief but magical trip and definitely one of the highlights of my life. Bernard Crettaz is the founder of Cafe Mortels and his work inspired Death Café. Without him it wouldn’t exist in the way it does. I went to Switzerland to interview him and also attend what was advertised as being his last Cafe Mortel.

I flew from London to Geneva with my lovely friend Marianne who kindly agreed to help translate, and Mdhamiri who is making our film about Death Cafe. We were driven to Lausanne by the lovely Dorrette, a former champion skater of Switzerland who has known Bernard for decades. Also in our party was Sophie, a journalist who is wrinting a piece about Bernard and Death Cafes.

We met Bernard at the School of Social Work and Health in the university in Lausanne (EESP). This was hosting a 1 day conference organised by the Société d’études thanatologiques (http://www.penserlamort.ch), which Bernard had established. The event was due to end with Bernard's last Cafe Mortel.

When I first saw Bernard I felt emotional but he immediately put all of us at our ease. He was a really lovely host and person. He is very energetic and a great raconteur, always telling stories and engaging with people. I found him to be extremely present. He is also very funny. When we first met, Marianne translated him as saying that "together the big and the small will go down in history!"

Bernard agreed with our request that we interview him at the harbour. We chose a beautiful setting, on a bench with the light from the setting sun reflecting on the water. I interviewed Bernard for an hour with Marianne translating. We talked about his last Cafe Mortel, the work we've done as Death Cafe and the proposed 'real' Death Cafe in London as well as a number of other things.

Bernard is a great speaker and the answers he gave were facinating and very 'meaty'. The interview time flew by and it was the high point of the trip. The footage is currently being subtitled and I can't wait to share it with you.

Following the interview we returned to the University for the last Cafe Mortel, being joined by Marianne's lovely mother. There were over 100 people present for this event and Bernard had devised a special format. He had contacted 10 people he'd worked with over the years and asked them each 1 critical question about the work that he / they had done with regard to death.

While we listened Bernard would then ask each person the question outlining his reasons for doing so and the person would respond. I think Bernard was anticipating some criticism but it seemed he consistently received gratitude and love. Elizabeth, Bernard's wife, was one of those who spoke and she said "ca suffit" for his work with death ("that's enough!")

All to soon it was over. Bernard left for his mountain home and we left for a hotel. I am so glad that I got to meet this wonderful man and attend his last Cafe Mortel. 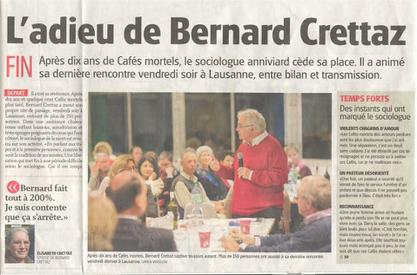 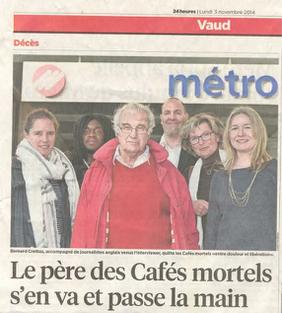 Fabulous Jon! I am so happy you got to meet on such an auspicious occasion. That must feel like a piece of the puzzle finally fitting into place! I spoke about both you and Bernard during my presentation at the Palliative Care Conference, perhaps at the same time you were meeting! I look forward to further installations!

This is wonderful! Thank you for your making the effort to travel and visit this extraordinary man and tell us about your visit.

Hi Jon, I've been searching the web for anything about Bernard Cretazz, and lo, here it is. What a wonderful article, thank you for posting it.

So inspiring, Jon. What an amazing opportunity. Thank you so much for sharing this, and for your commitment to your work. Really looking forward to the film.
Best wishes to you.

Jon...the passing of the baton! I am sure that Bernard is pleased to know that his legacy lives on through a new generation of Death Cafe. I add my gratitude and admiration for your passionate achievements. Keep up the great work Jon!

jon, wonderful photograph! and so generous of you to share your experience. that you met bernard cretazz deeply inspiring. very much looking forward to the film thank you.