Connecting through conversing: How Death Cafe's facilitate the normality of death and dying. 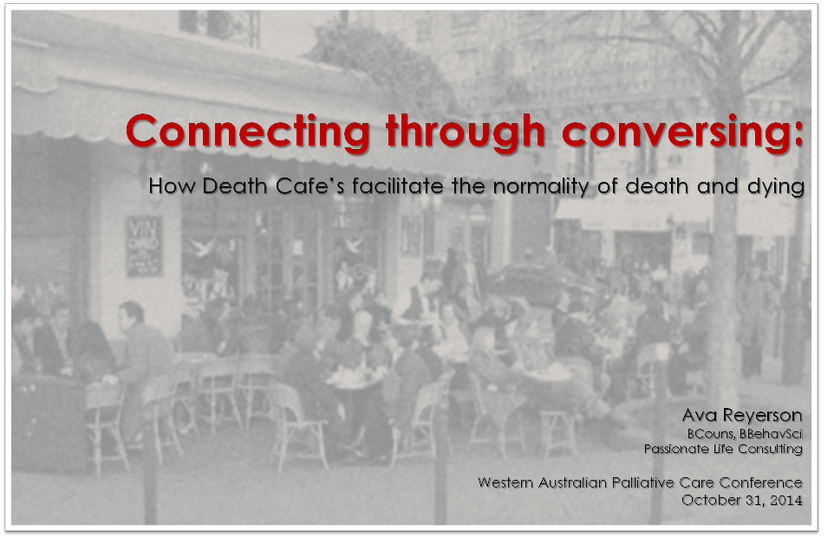 The title of this blog post is also the title I used for my presentation at the 2014 Palliative Care WA Conference, held on October 31st.

I was given 20 minutes to present on what could have taken me a lifetime to present about! But present I did.

It was my first conference presentation but not my first public speaking engagement about the Death Cafe.

I have been running my Death Cafe monthly here in Fremantle, Australia since March 2013. I am a counsellor and behavioural scientist and I facilitate conversations about death and dying.

My experience with presenting about the Death Cafe to an audience who specialises in palliative care was amazing, to say the least. With 150 people in attendance I was pleasantly surprised how many people had heard of the Death Cafe movement spreading throughout the world.

I was not a plenary speaker and so my audience numbered to about 50 people or so. The section of seminars I presented in was titled Bereavement.

Given it was a conference on palliative care you'd expect many of the presentations to be academic, factual, theoretical and maybe a little dry or boring. Apart from boring, many of them were just that. I knew that would be the case and wanted to make my presentation as engaging and entertaining as possible, without making it and the Death Cafe seem trivial.

There were lots of nodding heads in agreement of my statement, plenty of laughs and so many questions at the end that I ran out of time answering them!

It seems as though talking about death and dying in this particular format was 'new' to the palliative care audience!

I spoke about the Death Cafe history from its inception through Bernard Crettaz then on to Jon Underwood and its UK origins.

I gave an account of how fast the movement has grown in such a short time, amplifying how important having conversations about death and dying has become.

Through imagery I highlighted who participates and facilitates in Death Cafe's.

Multi-coloured speech bubbles were used to demonstrate the conversation that occurs. No matter the variation of stories that are told, the conversation has a life of its own, as many who run Death Cafe's know. There is a beginning, a middle and an end that flow regardless of who brings what to the table! I find this thoroughly fascinating! I got very animated with my audience at this stage of the presentation!

In my second to last of 7 slides I spoke of the far-reaching outcomes that these conversations could have. Like the ripples of a pond after a rock has been thrown, the Death Cafe movement being that very large rock, these conversations are spreading thick and fast. I wonder what Western society will be like when the conversation about death and dying is as normal and everyday as birth and living. I posed this question to my audience. Asking them to think deeply the impact Death Cafe conversations will have on the future of humanity.

I ended my presentation with my own reasons for engaging with the Death Cafe movement, and with death and dying. I began my journey iwth death and dying very early in my life and for some unknown reason, became fascinated with how people do and do not react to the death of a loved one. When I decided to study counselling and behavioural science in 2008 I knew I wanted to work with death and dying in some capacity.

Never did I think it would be doing what I am today but I am certainly grateful for where life, and death, has taken me so far! 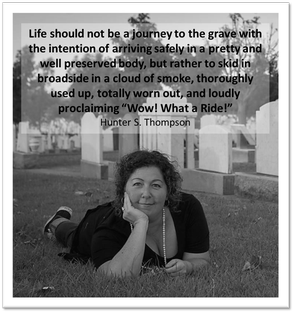