Death in Classic and Contemporary Film: Fade to Black 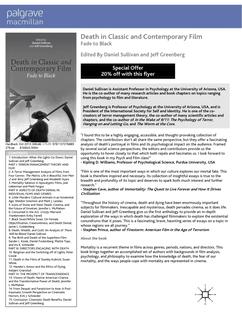 Daniel Sullivan is Assistant Professor in Psychology at the University of Arizona, USA. He is the co-author of many research articles and book chapters on topics ranging from psychology to film and literature.

Jeff Greenberg is Professor of Psychology at the University of Arizona, USA, and is President of the International Society for Self and Identity. He is one of the co-creators of terror management theory, the co-author of many scientific articles and chapters, and the co-author of In the Wake of 9/11: The Psychology of Terror, Hanging on and Letting Go, and The Worm at the Core.

Death in Classic and Contemporary Film Fade to Black

"I found this to be a highly engaging, accessible, and thought-provoking collection of chapters. The contributors don't all share the same perspective, but they offer a fascinating analysis of death's portrayal in films and its psychological impact on the audience. Framed by several social science perspectives, the editors and contributors provide us the opportunity to hover closely to that which both repels and fascinates us. I look forward to using this book in my Psych and Film class!" - Kipling D. Williams, Professor of Psychological Science, Purdue University, USA

"Film is one of the most important ways in which our culture explores our mortal fate. This book is therefore inspired and necessary. Its collection of insightful essays is true to the breadth and profundity of its topic and deserves to spark both much interest and further research."

- Stephen Cave, author of Immortality: The Quest to Live Forever and How It Drives Civilization

"Throughout the history of cinema, death and dying have been enormously important subjects for filmmakers. Inescapable and mysterious, death pervades cinema, as it does life. Daniel Sullivan and Jeff Greenberg give us the first anthology to provide an in-depth exploration of the ways in which death has challenged filmmakers to explore the existential conundrums that it poses. This is a fascinating, brave, haunting series of essays on a topic in whose regions we all journey." - Stephen Prince, author of Firestorm: American Film in the Age of Terrorism

Mortality is a recurrent theme in films across genres, periods, nations, and directors. This book brings together an accomplished set of authors with backgrounds in film analysis, psychology, and philosophy to examine how the knowledge of death, the fear of our mortality, and the ways people cope with mortality are represented in cinema.