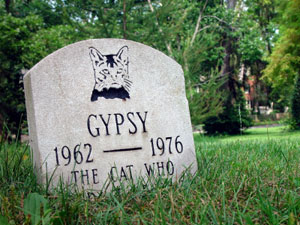 In the Death Cafe guide (6.1) we actively discourage having themes for Death Cafes. A themed Death Cafe is a Death Cafe that is devoted to the discussion of a specific topic, such as funerals, grief or planning future care.

I mention this because Besty Trapasso in Los Angeles has just posted a Death Cafe specifically for the pet owning community.

In my opinion this works because themes tend to narrow down the discussion. What happens if someone wants to talk about something else at a funeral-themed Death Cafe? Also these event are more likely to move towards being information giving sessions which Death Cafe is definitely not. And it is easy for people who know a lot about the theme to find themselves taking the role of 'experts' which also tends to skew the conversation.

However having a Death Cafe for a community makes a lot of sense. We all belong to so many different groups and it is natural and appropriate to discuss death with people who know where you're coming from. And if the coversation moves around, as it always does - no problem. As such I hope we have many more Death Cafes for differnt communities.

Please let me know your thoughts on whether this makes sense to you and if it could be more clearly communicated in our docs.

Thanks for asking Elise. I responded via email but just to reproduce this here:

Having a Death Cafe for a specific community and holding it in a space that is appropriate for that community makes absolute sense. So no problem at all with that, in fact it sounds like a great venue.

If the specific community for which one is having a Death Cafe is a faith-based one, is it acceptable to hold the event at the place of worship?

We have a Death Cafe every week in Mexico City for LGTBQ aging and their friends, and interested others. The discussion is always dynamic!