Article about Death Cafe in the Japanese press 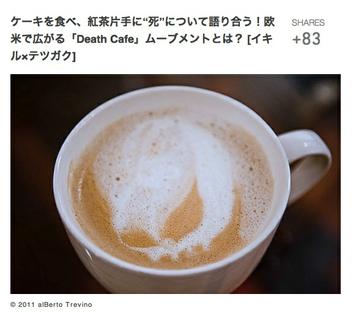 The conversation is moving eastwards!

Thanks for writing this article, Yuma! My friend, Lizzy Miles, used Google Translate and told me that I was mentioned in it about the Death Cafes I host in St. Joseph, MO. Thanks for including me in it :) I'm so happy that the Death Cafe movement is moving eastwards!

I am excited to see your article. I am the host of Death Café Atlanta and I was very happy to see you used some pictures from our Death Café. The photo with the little card in front with the logo of Death Café ATL was taken by my 14 year old daughter. I was proud as a father to let her know she has a photo published in a Japanese paper. I wish you well in your endeavors and hope you may be able to host a Death Café in your area.

I wrote this article!!

I'm happy to see you share my article on Deathcafe.com!!
I'm an intern writer of the web magazine publishing it, named greenz.jp. Thank you very much for introducing it to all Death Cafe lovers around the world!

I'm a Japanese university student majoring philosophy at the department of ethics. In japan, perhaps as in other parts of the world, the number of people who are interested in philosophy is gradually decreasing. I guess one of the reasons for this is that they don't believe philosophy can play a practical role in our daily lives. But I won't agree with them. It must be important for each of us to spend some time in pondering over some philosophical problems such as "why we live?", "what is freedom?", or, just like one of the most popular topics in Death Cafe, "what does death mean?"

I believe in the power of philosophy as I said now, then I got eager to introduce the movement of Death Cafe as a "practical" example that connects philosophy with our life. Actually this article is in a serialization through which I'm trying to show how philosophy has a great potential to make our daily lives better and healthier.
The article was released yesterday and is attracting much attention. As far as I know, all of the readers who tweeted about it are interested in Death Cafe and some of them seem to seriously consider the possibilities of thinking about death from the standpoint of health care or mental care. Of course I'm also willing to host a death care with some of my friend in the near future!
I hope "Death Cafe" movement will spread in Asia too, and I'd love to take part in a death cafe in other countries.