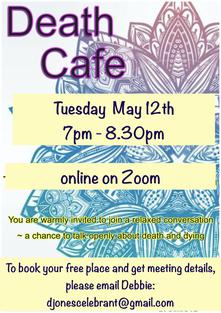 Once they’d chatted on email, then I sent them the link and extra info.

(One person emailed to book, then didn’t reply to my ‘chat’ and disappeared.  They hadn’t told me their name.)

This might sound harsh, but safety is paramount in small groups, especially, I think.

In the real-life Death Cafe, I ‘float’ around to check each group is working out ok, and if anyone might need follow-up afterwards eg if in distress / grief.

At the Zoom DC, I did the same.  I await feedback to find out how that was for those attending.  I stayed in each group for around 10 mins.

Otherwise, I will save any important info for the actual introduction at the start of the session.

If people do come early who are confident on zoom, then I’ll encourage them to switch their mics off and maybe even go away and come back for the intro/actual start.  Can be a bit of a spectator-time otherwise, which might feel awkward for some.  I actually enjoyed seeing people from our regular, established Death cafe and listening them all delight in seeing each other.

This was an excellent idea of hers, as I felt very well supported and she felt more able to hold the tech side of things.

Whenever I left a group, I’d go back to the main meeting and there she was!  It was great for me to have a minute’s break.

She, of course, missed the whole DC experience, however, other than the intro and the ending.

I didn’t play background music, as we don’t so that at the real-life DC and I had a sense it would be fine without.  Kept it simple.

It was good to have all that time for people to help each other sort out any issues with Zoom - some seemed to enjoy being the technical support for others!

The zoom host and I agreed that if anyone came who we had a tricky feeling about (eg if they wouldn’t turn their camera on) we would leave them in the waiting room and one of us would speak with them once the groups had got going.

I told everyone we could and would intervene.

My notes for the eve

I’ve been hosting a regular DC for 3 years now, but this is all an experiment on Zoom.

I’ll do a short intro,

Then we will go into small groups - for most of the session. 8.20 come back.

Familiar with Zoom? Eg Mic off / on

I ask that you keep everything confidential.  If someone you know here talks about something this eve, don’t assume they want to talk about that at another time.

Aiming to create a safe space, so we can relax and share openly.

I’m not recording this in any way, so we all feel safe

My main concern  - one person in the group will dominate

Some of us are more confident in groups than others - please take responsibility for everyone having a chance to speak if they’d like to.

I’ll be dropping into some of the groups, to have an overview on things - fly on the wall

No need to stop talking or include me

Could start by briefly introducing yourself and where you’re speaking from.

You might want to say goodbye to your group when you see the 5 mins warning - otherwise there’ll be no other chance.

Let’s have just a 2 mins break now, to look away from the screen and give your eyes a rest, and stretch your legs.  When you come back, there’ll be a message to join a group. Just click it.

A couple of things because we’re on Zoom:

1). If someone is dominating the conversation in your group, please tell me by typing in the Chat box, with their name, and I’ll come and join your group.

2). Importantly - if there is someone you don’t feel safe with, do tell me or Vicki in the chat  - with their name. We can intervene.

Chat box/Participant - You can only chat with me,  Vicki, or send a message to Everyone - all will see it.

I stay in main session but dip into rooms - I click ‘BREAKOUT ROOMS’ to go to the next room V has set up for me, then back to Main Session again before going to next group.

AT 8.10pm Send to everyone to show on the screen

“10 mins before we come back to the main meeting. Your group will be invited to list / say a few topics you’ve been talking about, if you’d like to.

Or you could type these in the chat.”

Welcome any feedback or comments by email.  Me dropping in and out.

THANK all for coming - and tech-host-support

Lastly, take care of yourself, esp if feeling tender and open.   The end of a Zoom call can be very abrupt.

This is really helpful. Thank you very much for sharing your great advice. I have hosted 'real life' Death Cafes before but my first zoom one will be next week as part of Dying Matters Week. I was too scared of zoom this time last year to consider hosting a zoom meeting about anything at all, but I have got fairly zoom-proof by now, even though technology still confuses me. Your advice on how to welcome people and set up the virtual Cafe is especially useful. Thanks again / Diolch eto (as we say in Wales)

I hosted a Zoom DC last night and I wish I'd seen your post before it. I did end up with an inappropriate participant who was suicidal and in need of therapeutic help. It worked out OK but a prior screening would have eliminated her and probably made the rest of the group feel more comfortable. I'm still learning!