Wondering about how to hold a death cafe? 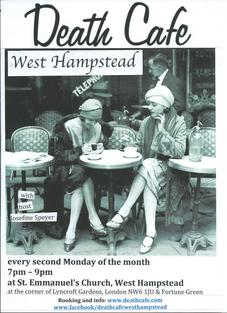 Wondering about how to hold a death cafe?

Over the years I have often been asked for advice on this.

I like to encourage people and am happy to depart with my bit of wisdom for what it is worth. Writing about it is quite time consuming every time, so when I was asked about this again the other day I decided to post it here in case it is useful to others:

Read all the information on the death cafe website on 'How To Hold a Death Cafe'.
Read 'What a Death Cafe is'.
Read how other people advertise their death cafes and what they say about them.

Do you know someone who shares your interest in death cafe and would be willing to hold one with you? Either at your/their home or at a cafe, maybe just around one table? Perhaps for six people, including you, so it is not too big a group?
I think that would be a good start to help you build confidence.
Size it not what matters, quality is!

Choose a time, day and place for your death cafe.
If you have a private death cafe you can still publish it on the Death Cafe website, just tick the box on question 7 of the submission form so that the Death Cafe is listed as taking place, but the location isn't listed. This way Death Cafe will know how many deathcafe have been hosted world-wide.

Invite people who are part of your networks?
Send out invitations by email which also explains what a death cafe is or talk to people.
Ask people to confirm they are coming.

When I started I held a couple at death cafes at my house with Jon Underwood, the founder of death cafe. We had room for 12 people. I invited people by email and also posted it on the death cafe website, asking them to book, so I had an idea of numbers and who was coming.
I held my death cafes always in the evening so people can come after work.

We sat around one very long table. After a couple of these death cafes I found a public venue in the private upstairs room of my favourite French cafe in Hampstead with easy access to public transport.

The death cafe was on a Monday evening because Mondays was when the venue was available for free. We sat around one long table. Starting with 10 people or fewer we soon grew to 20 and even 30 people attending (full capacity of the venue) when journalists attended and wrote articles about their experience of it. People came from far and wide to our death cafe and many people came regularly. Some of the regulars became my co-facilitators, so each small table of four or five people had one facilitator who also took part in the general discussion. The facilitator makes sure that everyone keeps to the basic rules of death cafe which as a host I reiterated each time in the general welcome at the start of the evening where I also explained how Jon started death cafe, what is death cafe is and isn't, and explained the structure of the event, so people knew what to expect.

At the beginning we had one conversation around one table for two hours.

When numbers grew we had up to six tables of five people for 90 minutes (7.30pm - 8pm) followed by a 20 minute break.
Around 8.20pm we created a large circle and came together in the whole group to reflect on the evening for 45 minutes or less.
After this, around 9.05pm we had 10 minutes filling in feedback forms, ending at 9.15pm.

Before leaving many people would stand around and carry on talking whilst the waiter cleared the tables.
With my co-facilitators we had a short de-briefing session.
I always left the event feeling elated.

Nearly all my co-facilitators and several of the guests went on to host death cafes of their own, several of them based on this model.

Our death cafe was a monthly event held every second Monday of the month.

I would be interested to hear what you decide to do and how it turns out.

Let me know what you decide?
If you have any questions, just ask.

I just want to add this about the way I actually death cafe conversations:

To start the ball rolling I always ask What brings you to Death Cafe? It is a good question for first timers and equally good for people who have come (back to this death cafe) many times. People talk about their experiences, their personal stories. I find that as we go round the table with each person introducing themselves and why they have come, it is fine to engage with them and to ask questions if necessary if it elaborates an interesting topic or to clarify something. Rather than sitting silently listening to a series of monologues, I encourage conversation from the start. The best death cafes are those where people talk to each other and engage with each other’s point of view. All experiences are valid. There is no discrimination. There is also no particular aim to the conversation, other then sharing, listening to each other and hopefully people feel inspired by each other. I find it is a very life-affirming experience. We meet as strangers and over the course of the evening people create a sense of community with fellow mortals, and that is the beauty of death cafe.

I have a grief group and really want to host a death cafe. I live in Louisiana,so haven't heard of one going on here