Co-hosts Jackie Genovese and Celine Currier created the Connecticut Death Collective to serve as a local community for death positive individuals to collaborate and communicate about death, dying, and burial in Connecticut.

Jackie has been interested in death for as long as she can remember. Coming from a large family, she has been to more wakes and funerals than she can count, which peaked her curiosity at a young age. She is passionate about normalizing conversations surrounding death and aging and believes that death anxiety can strongly affect other areas of our lives. After losing her job and her grandmother due to Covid, she has been using her time to pursue her passion and find her niche. She is currently training to become a hospice volunteer and working with others to advocate for a co-op for cemeteries in her home state.

As a child, Celine had an awareness of death on a personal level through the passing of family and friends. After graduating with a BA in Philosophy and Psychology, she found work caring for people nearing the end of their life. After joining a Threshold choir, she was able to witness firsthand how sacred the dying process is. During this time she also became interested in the work by the non profit Death with Dignity, which supports people with terminal illnesses who wish to hasten their passing. From there, she found herself learning about the realities of the funeral industry and people’s options for home funerals and green burials. Her fascination with all things end of life has a wide berth that expands every day the more she learns.

We would like to hold a consistent space for open discussion with the focus on building community in Connecticut. The CT Death Collective will also be hosting a number of other virtual and in person events in the coming months. If you are interested in finding out more about our events, please visit our Facebook. 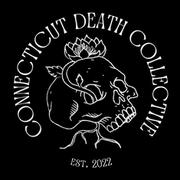 Meetings are held via Zoom on the third Monday of every month from 7pm-8:30pm.

Thank you for your interest and we look ...


We wanted to run a Death Cafe in order to hold a consistent space for free flow discussion with the focus on building community in Connecticut.

With Celine Currier and Jackie Genovese


Meetings are held the third Monday of every month at 7pm via Zoom until further notice. Links will be provided to registrants so please register below. This is a free ...