Message from Jon's friend Mark and how to help

As an old friend of both Jon and Donna, and Jon's best man at their wedding, I also wanted to share my feelings with this wonderful community, after his tragic death at the age of 44.

In 2011, Jon came to ask for the help of his family and friends with an idea he had had. That idea was Death Cafe, with its mission to increase awareness of death to help people make the most of their finite lives. Fittingly, he explained it over a cup of coffee. There were two ideas, one was Death Cafe. I thought they were both bad, and Death Cafe the worst of the two.

I was utterly wrong. 6 months later,  I was lucky enough to attend the first Death Cafe, in Jon's house, hosted by Sue Barsky Reid. Although I had no great desire to explore death, perhaps even a fear of doing so, I found the session deeply moving. I felt a bond with people whom I had never met. There was a lady who discussed her fear of dying who I still want to give a hug, even though I wouldn't recognise her on the street. Death Cafe was powerful and intoxicating.

Since that date, tens of thousands of people have attended Death Cafes all over the world. I hope and believe that it has had a positive impact on people's lives.

Jon was very humble. While he dreamed big, I don't think he truly believed in the impact his work was having, and was constantly downplaying it. I would love for others to share their experiences here, to shout about the difference he made.

Jon dedicated himself to Death Cafe for 6 years. He gave up good work, and received no financial reward. It was a labour of love; something he passionately believed could make the world a better place.

Jon spent an enormous amount of time establishing the founding principles of Death Cafe. They were for anybody and everybody. Inclusive of all religions or none, of all orientations and political persuasions. Death Cafe is not for profit. It belongs to everybody. It is a social movement with no owner.

These principles mean that the movement can thrive even now my beautiful friend has died. It was built to last, and the rules will remain true now and deep into the future.

At this moment we need you all: to carry on and extend the wonderful work you are doing. Jon's family will continue to connect the community and run the Death Cafe site. We want to thank and acknowledge the important role played by so many to get us to this point. Bernard Crettaz, who provided the inspiration, Lizzy Miles who was the first to extend the idea to the United States, and Megan Mooney who worked with Jon on social media, and indeed to anyone who has hosted, or attended a Death Cafe, or even simply been provoked to think about death.

Jon felt that the open discussion of death could genuinely change the way that people thought of life, and the way they treated each other. It was for him a radical movement beyond politics. In his death I understand the true brilliance of this. He was a kind visionary.

I remember many times Jon listening to me intently, and then making an observation that I would spend days puzzling over. Often I never understood. He was a brilliant man, and a lateral thinker. I am grateful I have come to understand the power and importance of Death Cafe.

A seed has been sown that belongs to us all. It would be my proudest wish if you could all join together and turn Death Cafe into a mighty oak. It will be a joint enterprise of equals as Jon would want.

Jon, thank you. And thank you to this amazing community who meant so much to him.

Jon has also left behind a gorgeous family, quite as special as him. Since 2011, he has funded his Death Cafe work entirely through his own personal savings and small freelance projects and had recently begun trying to fundraise very actively so he could pay his bills. Since hearing the devastating news, Jon's friends at the Good Funeral Guide have set up a JustGiving page which will be available for 2 weeks. It would mean everything to me and his friends if the Death Cafe community could show their gratitude for everything he has given them by financially supporting his wife Donna and children Frank (10) and Gina (6). 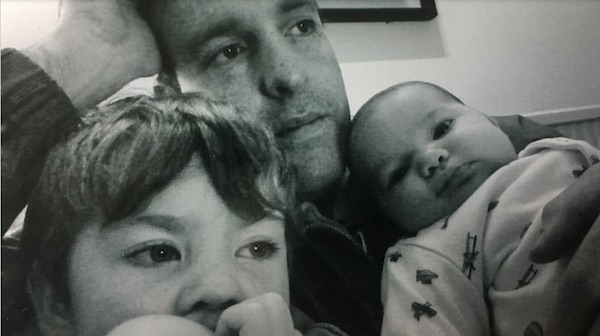 Thank you so very much for this - and may Jon Underwood kindly send you back a message or two from the other side.

News of Jon's death has shaken me today. I extend my deepest sympathy to you, his family and extended family and friends around the world. I sincerely wish him peace, and hope his vision will continue to shine and inspire others to talk openly about death and dying. Blessings ❤️

Thank you Donna and Mark for your posts as your words help us all to feel connected during this tender time. My deepest and sincere sympathy to Jon's dear family. friends, and to everyone who had the privilege to know him.
Jon is a real time hero to me and I am deeply saddened to hear of his death. He remains truly and deeply in my heart as a guide and mentor for work that I have great passion for. He was a pioneer for death conversations, and he taught us how to do it so humbly, beautifully, and equitably. Here in Flagstaff, I have witnessed depth and magic at our Death Cafe each and every time. Yes, Mark, "powerful and intoxicating" is a perfect way to frame it. A phrase coined by one of our facilitators is "That Death Cafe Buzz". . . it has uplifted thousands worldwide. While words fail to express my sorrow and gratitude, I take solace in our Death Cafe community and know that Jon's legacy and spirit shall continue to light the way for this important work to continue. May that mighty oak multiply to a forest of many.
Gratefully, Aleia

The simplicity and power of death café has enriched my life. From the small town in the small state of Vermont, I send heartfelt condolences and steadfast assurance that death café will continue in Jon's beautiful mission.

At this moment, I am unable to send money, but, as a Reiki Practitioner, I will humbly offer a healing to the family and the entire Death Café community worldwide.

Thank you for your words Mark, and sincere condolences to Donna and the family. Jon's humble encouragement was pivotal as he inspired and helped me establish a Death Cafe in Cape Town, South Africa. I feel privileged to have known him, even briefly. He has touched my life and indirectly, the lives of many others that I have only met because of him - people who have become dear friends. Our next gathering will be held in his honour. Indeed, every time we meet, Jon's name is spoken, his work acknowledged. His legacy is enormous and continues to grow. With love to all in the Death Cafe community - Sean

I am very shocked this morning to learn of Jon's death. We worked together some years ago and he was a quietly inspirational colleague, a unique person who touched people's lives unforgettably. I think the death cafe's are a work of genius, just like Jon. My thoughts are with Donna who I also know and admire.

Jon's death is sad news for the young family he is leaving behind. For us in Yarmouth Nova Scotia Canada it is motivation to continue with his work. We registered 28 persons for our first Death Cafe on June 26, 2017 therefore had to schedule 2 nights. Will offer each month going forward. Amazing conversations! Thank you Jon! And deepest condolences to the family

It is our 4th Birthday as a Death Cafe here in Maple Ridge we will be celebrating it on Septmeber 5th. Our cafe is totally based on Jon's model and I have run it faithfully inspired by his passion for this great work.

We will dedicate our next year's meetings to Jon's efforts and send all his friends and family blessings and love at this important time.